The Stick or the Carrot? 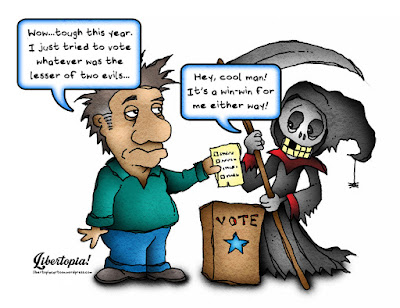 Is there really a difference between the Republican Party and the Democratic Party? Many Americans believe the current electoral system is rigged. These two capitalist parties have made it nearly impossible for any other party to participate in elections. The first hurdle is simply to gather sufficient signatures to get on the ballot. A national candidate is obliged to go through a daunting process in every state with each state having its own rules for ballot access. It is a system that excludes by its very nature and by subterfuge a viable third party.

Progressives candidates often run as Democrats and have gained seats from city councils to Congress. They think that it is possible for progressives to capture the Democratic Party and make it into a radical party of the people. The Democratic Party would never allow a takeover or even a significant influence to grow within it. The Democratic Party, just like the Republican Party, belongs to capitalists, just as does almost everything else in the country. The DNC demonstrated it power when it dealt with that interloper Bernie Sanders. They soon had him toeing the party-line.

The two corporate parties represent their Wall Street and Big Business donors, and they continue to undermine the rights of workers and let employers get away with breaking labor, health, and safety and environment laws. The “lesser evil” Biden offers half-measures, but nothing of substance and nothing that will save the planet or mitigate the ecological vandalism. Biden will not create social justice nor end violent conflict, racism. He will not  banish hunger and malnutrition, eliminate student debt. He will fail to house the homeless. Biden will not provide justice, support and solidarity to asylum seekers and migrants. It is impossible to comprehend that Biden possesses any vision. He is tied to the existing institutions and its capitalist ideology. He cannot heal our communities.

It is time turn our attention to re-imagining society and building a new system from the one we presently live under. We must establish a better way of living together. We need to demand changes that move humanity in a new direction completely. Transforming the world seems impossible at first. The obstacles appear insurmountable at the outset. Nevertheless, as the English socialist William Morris explained:

“One man with an idea in his head is in danger of being considered a madman: two men with the same idea in common may be foolish, but can hardly be mad; ten men sharing an idea begin to act, a hundred draw attention as fanatics, a thousand and society begins to tremble, a hundred thousand and there is war abroad, and the cause has victories tangible and real; and why only a hundred thousand? Why not a hundred million and peace upon the earth? You and I who agree together, it is we who have to answer that question.”

Our world is one of disruption, dislocation, destruction and chaos. It is another era of the Robber Barons. But even a criminally unequal society still requires a certain degree of the consent of the governed in order to function. Police brutality alone won’t work as Trump is discovering. So some of our masters decide the good cops are the better option and send in Biden and Harris.