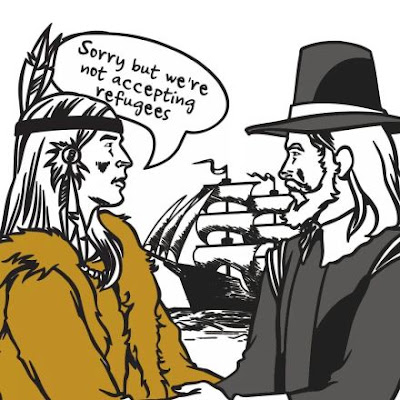 In 1620 the Mayflower took its 102 men, women, and children – the majority of whom were Puritan religious dissenters known as Separatists, but also called Pilgrims – from Plymouth to what they hoped would be the Hudson river.  It was an act of madness because they were going at the wrong time of year into an incredibly dangerous Atlantic.

They endured a treacherous 66-day voyage and were blown off course, landing on the tip of what is now Massachusetts, before crossing the bay to set up a colony on land belonging to the Wampanoag, whose name means “people of the first light” and who had inhabited the area for some 12,000 years. They had an estimated population of at least 15,000 in the early 1600s, and lived in villages on the Massachusetts coast and inland. Their help enabled the English to survive, and also became the basis for the much-mythologised first Thanksgiving feast, still celebrated in the US. Although there were periods of good relations between the English and Wampanoag, there were also violent conflicts, culminating in King Philip’s War of 1675, which ended with the head of Metacom, the Wampanoag leader, being put on a spike and the survivors sold into slavery. It was a far cry from the scenes of a harvest celebration.

Although the mythology presents them as fierce critics of the Church of England seeking religious freedom, they had already found that in the Dutch city of Leiden, where they lived for a decade before crossing the Atlantic. What drove them onwards was the lack of economic opportunity.

“It’s just not the story we think it is,” said the exhibition’s curator, Jo Loosemore.

Economic factors fuelled the Separatists’ decision to obtain permission from the London Company of Virginia to establish a colony, and for funding from the Company of Merchant Adventurers.

But religious freedom and economic opportunity for the English would come at a heavy price for the Wampanoag. By the time the English arrived, the Wampanoag would have been familiar with Europeans, including the terrible diseases they brought. A few years before the Mayflower’s passengers landed, a plague wiped out an estimated 70% of their population. When the Pilgrims stepped ashore, the Wampanoag had been significantly weakened and were willing to make alliances with the English in order to keep their rivals, the Narragansett, at bay.

“These were people who came here for their religious freedom because they couldn’t worship as they pleased in their own country, and yet when they came to this country they did not seem to have that same tolerance for the people that they met here, despite all that the Wampanoag did to help them,” said Paula Peters, a member of the Mashpee Wampanoag Tribal Nation . “You can’t have a colony without someone being colonised.”

Yet the myth of Native American and English in Thanksgiving harmony remains. This mythology persists, despite the fact that the Pilgrims were not the first Europeans to arrive in North America, and their relationship with the Wampanoag was far from peaceful.  US President Abraham Lincoln declared a Thanksgiving holiday in 1863 in an attempt at national unity while the civil war was under way. In the decades that followed, these strands merged together into a narrative, which was fostered by a New England elite that including many prominent US leaders who were Mayflower descendants, such as the second president, John Adams.

The Pilgrims are often used as an origin myth for the US, the English were late arrivals to North America. Juan Ponce de León explored Florida as early as 1513, and the Spanish had a settlement in St Augustine by 1565, while French Huguenots tried and failed to establish a colony on the coast of what is now South Carolina in 1562.

Some 35 years before the Mayflower, two ships set sail from Plymouth to explore the North Carolina coast, and the following year the colony of Roanoke was established, but by 1590 all the settlers had disappeared. Eventually, in 1607, the English had success with the colony of Jamestown, Virginia, which managed to survive. As well as these early settlers, Europeans came to trade – and often to kidnap and enslave Native Americans – well before the arrival of the Pilgrims. Jamestown, with its slavery, and St Augustine, with its Spanish Catholics, were ignored, and the national story became that of the hard-working, freedom-seeking Protestant “Pilgrim fathers”, aided by kind Native Americans.