Profiting From War - It's The Bottom Line

Posted by Janet Surman  Labels: capitalism's bottom line, war profits
"In every adversity lies the seed of an equal or greater benefit." Death and destruction, homeless and terrified populations, disaster and chaos likely to continue for years? Let's not dwell on that, there's plenty of good news for those making profits from war material.
Three days after U.S. warships fired 47 cruise missiles at Sunni militant targets in northern Syria last week, the
More..>

World War One and the SPGB 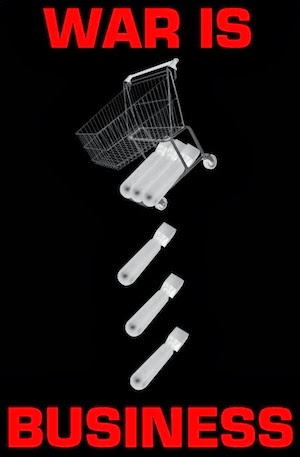 “The fraternization of the workers of the world is for me the highest and most sacred thing on earth; it is my guiding star, my ideal, my fatherland. I would rather forfeit my life than be unfaithful to this ideal!” - Rosa Luxemburg

Austria-Hungary had annexed mainly Serb-populated Bosnia in 1908. It was now plagued by repeated terrorist incidents at the hands of nationalist Serbs. Serbia, if attacked by Austria, could rely on Russia to come to its aid. But if Russia did so, and was itself threatened, it could call upon France's military support.  Austria  had Germany's support if threatened by Russia. Britain, meanwhile, was bound to commit its forces in France's support if France was menaced...More

It is never in the interests of the working class to support war.

Wars are fought over private property and related issues and as long as we live under capitaIism the conditions that give rise to war will always exist.

Capitalism is the cause of modern war....More

On 6th of June 1944, the Allies breached the Atlantic War and began the invasion of German-occupied Europe. SOYMB thought it an apt day to reiterate its views on war.

Socialists have no direct control in any country and in particular they have, in fact, at present little influence on the international policy of a particular country.  The working class prove quite powerless to arrest the enormous expenditure on armaments. They cannot determine the course of the government’s diplomacy. Millions can march as they did in 2003 to protest the Iraq War but Blair and Bush were able to ignore the peoples’ will. It is the ruling class who decide when and where wars shall be made. The workers pay for them in blood and  in suffering. ..More

US PRESIDENTS WAR CRIMINALS SINCE WW2

Lyndon B.Johnson authorized invasion of North Vietnam based upon false Gulf of Tonkin Resolution alleging North Viet Nam had attacked US warship in Gulf of Tonkin, leading to the use of chemical weapons: napalm and agent orange in Viet Nam, 1965--War Crime   ...More

Preparing us in advance and perhaps in the hope of softening the impact, newspaper are reporting Tony Blair is heading for heavy criticism by the official inquiry into the Iraq War

Tony Blair's undertook a religious conversion and decided to become a Roman Catholic. Imagine being a fly on the wall at his first confession when he was asked about his role in the Iraq war. How many Hail Marys would the Pope have demanded for his penance. If Blair is to be a proper Catholic he will have to get down on his knees behind the curtain in one of those small boxes in a church while some robed hypocrite sits on the other side of the grille listening to him unburdening his mind before telling him how he can make himself feel a bit less guilty, perhaps by reciting those meaningless incantations. The question is, can Blair be trusted to come clean about his sins? After all what he has to confess will be the most serious for a Catholic – the mortal sins which have speckled his time in politics. On a chat show in 2006 Blair explained that he had prayed while deciding whether to order British troops into Iraq “I think if you have faith about these things, you realise the judgement is made by other people…and if you believe in God, it’s made by God as well”. How convenient to pass off the blame for the slaughter onto someone who could not be called as a witness by Chilcot and have his almighty say in the matter ! More..

Fighting for peace earned you anything from vitriolic accusations of cowardice and treachery to job loss, state-abetted mob attacks, arrest, imprisonment, hard labour, courts-martial, show trials and even execution orders.

Vanessa Redgrave playing anti-war dissident Sylvia Pankhurst, in the film Oh! What A Lovely War, which government education minister Michael Gove singled out as propagating what he called the myth of the first world war as a 'misbegotten shambles'. Vanessa Redgrave was one of the early signatories to the No Glory in War Open Letter.   ..More..

tonyon said...
This comment has been removed by the author.
10:18 pm

tonyon said...
This comment has been removed by the author.
6:18 pm

tonyon said...
This comment has been removed by the author.
8:52 am

tonyon said...
This comment has been removed by the author.
5:24 pm

tonyon said...
This comment has been removed by the author.
6:03 pm

tonyon said...
This comment has been removed by the author.
12:51 pm