The Boss Elections - We the People Can Win

We are living in a time of unrest and disorder, a time of great upheavals. Politicians and parties are flailing around in panic and despair. This is not the time for complacency.

The dyed-in-the-wool reformists, careerists and opportunists have remained committed to the Democratic Party. We are all told "now is the time for action to get Trump out of office." So Biden has a program of reforms, watered down as not to scare away any fence-sitting Republican voters. The Democratic Party has never actually been a working-class party (except in rhetoric), and has always been controlled by an entrenched, corporate leadership.

“The state is the executive Committee of the ruling class.” This elementary teaching of Marxism has been freshly confirmed by the electoral sham. Capitalist politicians, whatever their pretensions, cannot act other than in the service of their capitalist bosses. Neither of the two major parties has any serious program for the reconstruction of American society. All their talk has no meaning in the face of the economic and social crisis which lies ahead.

Trump’s autocracy is all too real. He is the barbarian who is now no longer at the White House gate but sitting at a desk in the Oval Office. Not that barbarism is anything new in this world of ours.

The United States remains divided along racial lines. Biden is seen as the continuation of the Obama presidency. African-Americans more than any other ethnic group understand white supremacy, racism and class exploitation. African-Americans live with state-sanctioned violence and and prejudice. The problems facing-African Americans are class and racial.

Working-class whites who back Donald Trump, see themselves as the victims of reverse discrimination for the lack of income fairness and jobs. They for the most part see Blacks, Hispanics, immigrants as threats. They fear that these groups could wreak “revenge” for what segregation did to them and demand reparations and believe it will come out of their pockets. White fear has always been a tool of the ruling class. They use race-baiting and fear-mongering to get these same whites to circle their wagons around their “white (nationalist) communities”, against black, brown and yellow people. Both parties are indentured to the moneyed interests of Wall St. Of course, the U.S.A is a democracy, the people are free to vote for whomever they like as long as they vote for a capitalist.

Republican voters have decided that it’s better to be poor, sick and bigoted than prosperous, healthy and open-minded, just as long there is another group of people with a lower status beneath them.

Trump’s victory was not an aberration but instead represent the false consciousness of many white working class because he “identified” with their alienation. We should not underestimate the extent of white supremacist indoctrination. He is redefining the parameters of “legitimate” political discourse. Some have described the Trump’s authoritarianism as “friendly fascism.”

Is there another option that offers a way forward? Isn’t it time now to initiate a wide-ranging popular discussion of an alternative.

The World Socialist Party fully believes that the whole is greater than the part, wastes no time advocating this or that reform, but spend their energies in educating the workers in the fact that in socialism alone lies their emancipation. One reason our membership is so small and does not increase as rapidly as that of some other parties is that we dangle no "red herrings" before our fellow- workers. The fate of those whom a political or economic bait can allure is one to be pitied and abolished and not one to make political capital out of. We denounce leaders because they advocate reforms to prolong the system, and because while capitalism lasts, workers have not the power either to allay those evils, which grow worse with the growth of the system. Above all we oppose these leaders because they urge the workers to place political power in the hands of the masters.

The World Socialist Party of the United States, alone in this country adopts the correct attitude in this respect. We expose the evils and point the only way to remove them. Those who believe that the present system of society is essentially an evil, who condemn private enterprise root and branch, their business is to join with those who are seeking to destroy it 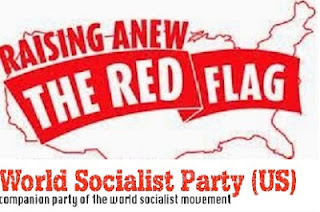