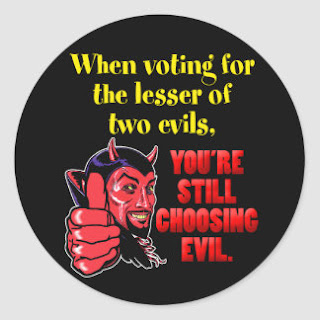 The election in November must become an opportunity for the World Socialist Party to point out that democracy is an illusion for working people under capitalism, and teach the workers that they must rely upon themselves. The actual importance of the election is to determine which representative of the capitalist class will become the national CEO of the United States for the purpose of exploiting and oppressing the working people. It is what Marx call the “executive committee for the ruling class.”

The two-party system is the two-headed monster of Big Business in government. Despite the pandemic the good times are flowing again for Wall Street and U.S. corporate profits have rarely if ever looked as lucrative. But it’s a brutal moment for working people, with very much worse possibly to come.

Reneging on campaign promises is standard conduct on the part of the capitalist parties of both names. Between Trump and Biden there will no doubt be cries of “vote for the lesser evil”, a familiar refrain in every election. The working class cannot fight capitalism through the Democratic Party. The Democrats are a big party of the capitalists just like the Republicans. Biden is the bipartisan choice of the capitalists. To fight Trump, the working class must break free from the influence of the Democratic Party and organize its own independent political movement.

In America the idea of socialism is one of misconception founded on misrepresentation. The capitalists have used all manner of differences within the working class — differences of skill, gender, religion, ethnicity, skin color, for example — to divide the working class, to make one group hostile to another so that workers will not see themselves as a class and act in unity against the capitalists. Trump has overtly encouraged violence against Hispanic immigrants, Chinese-Americans, and African-Americans people. All three groups are made up overwhelmingly of workers. Yet, more than a few white workers support this and some have followed through with acts of racist violence.

In the United States, employers have always tried to divide workers. Many had a policy of allocating jobs according to ethnicity, putting working groups together who spoke different languages and often had historic animosities. The idea was that this would make solidarity of all the workers very difficult to achieve. When people of diverse identities work together, they inevitably come to see each other as workers and full human beings deserving to take control of their lives and society at large. Workers are not just workers but full human beings, with communities, interests of all kinds, and concerns that go beyond work. All parts of life must be part of working-class organizational struggles. Housing, the environment, health care, family life, schooling, leisure, transportation, you name it. Workers will be much more attracted to such organizations than just to those that focus entirely on work.

Black workers were typically consigned to the worst, most dangerous jobs and were always paid much less than white workers. Given the history of slavery in the United States and the endless propaganda proclaiming the innate inferiority of Black people, this workplace discrimination fed right into white racial prejudices. If Black workers performed work no one else wanted to do, and for lower wages, then this was surely a sign that this is all they deserved to have.

The capitalist system, in its entirety, is the obstacle to emancipation from all inhumanity, indignity, wretchedness, barbarity, and exploitation.  In the electoral arena, one section of the exploiting class lends support to protesters demanding justice and dignity in order to settle a factional fight, while another section of the capitalist class pulls in another part of the population into its fold, cementing divisive politics from the top. Organizing along color or identity lines fails to lead down an emancipatory path but rather, ultimately play into the hands of the exploiting class. We must make certain that the working class is not divided internally.

As revolutionary socialists the WSPUS declares that the evils of capitalism cannot be overcome without ending the system of capitalism. It has  actively worked to generate a cohesive and class-consciousness among fellow-workers, to build unity and break down prejudices within the working class. Political parties without a class point of view, without a goal against exploitation, and presenting no analysis of the way the working class is exploited assist in the ruling-class deceptions aim to win the support of the exploited classes by confusing the workers in them.