The Oligarchs and the Plutocrats 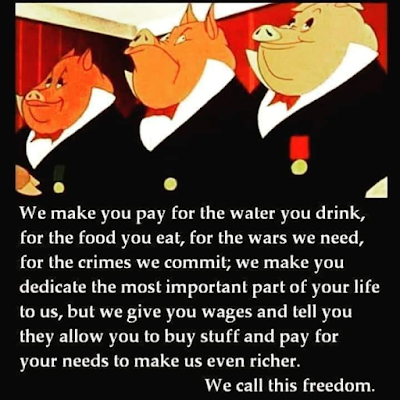 It is time for our American fellow-workers to do a little painful thinking. The American workers knows that this country is owned and controlled by the corporations but they do not realize that the day of opportunity for them to achieve the American dream and join the oligarchy has passed. But still many millions are opposed to socialism, which wishes to destroy their imagined delusion. Although the American workers is disgusted with the dominant Democratic or Republican parties, and if you ask what they think of such-and-such a political candidate, they will say, “Oh, he’s just a lying politician. They’re all alike — they make promises, but they never do anything when they get elected;” although the American workers knows that Congress, the State Legislatures and the City Councils are used by business interests for their own selfish purposes — still they do not know how to answer when told, “Well, if you don’t like your officials, vote for somebody you do like. You are the boss. This is a free country.” They know that the men thee elects to political office are controlled by Big Business but he don’t realize that unless workers, takes away the power of Big Business, they will always be powerless.

Why doesn’t American workers vote Socialist? Probably because they don’t like socialism, which means  a system opposed to “democracy” and “fair play,” which is the way he has been taught to characterize the institutions of this country. They believe voting for the Socialist Party seems impractical. We are told that “the socialists can never win, so it will just be wasting a vote.” They do not see that voting for a candidate who promises and does not deliver is just as much throwing away the vote as voting socialist. American workers do not see to the truth of the society in which they live. They are easily persuaded that all the flaws and abuses of the capitalist system can be corrected by reforms and legislation. They fail to understand that it is corrupt from top to bottom, because the capitalist class controls the sources of wealth.

Today’s democracy is the only exploitative system in which political power (right to vote, to assemble, to publish) are not the monopoly of the ruling class. The working class have the legal right to use their majority of ballots in any way they choose. More importantly, the workers are organized industrially. Therefore, it is essential for the capitalist class than it was for the ancient slave-owners or medieval nobility to convince the masses of people that the state rules on behalf of all citizens. The slave-owners and nobles persuade the slaves and serfs that class rule was right. The more potential political power the oppressed classes possess, the more urgent it is for the ruling class to insure that that potential power is not transformed into actual power. In the United States this is accomplished chiefly by the myth that fundamental differences divide the two major parties. The two-party system is a self-perpetuating trap. It preaches the unity of oppressors and oppressed. The excuse for the Democrats’ move to the right is that an appeal must be made to the conservative base of the Republican Party. The image of an increasingly conservative America is false, but it mirrors the views of the upper-echelon Democrats. The Democratic Party has always had at its core a share of big capitalists. The Democrats are proving once again to be no solution for capitalism’s victims.

The World Socialist Party holds that all government is legalized force, controlled by one class and used against another. For the first time in history, we are creating a legalized force controlled by the working class, the vast majority of the people, and directed against those who have exploited us and enslaved us.

Trump and Biden are competing CEOs of the capitalist system. Biden doesn’t promise to end exploitation and oppression, just to reform things a little. What he talks of reforming is the same old system which guarantees the making of profits and the exploitation of people. This is the same system of capitalism and imperialism that has brought death and destruction throughout the world. Biden is a representative of a certain section of the ruling class, which as a whole has set up a state apparatus to defend and maintain its position. This ruling class is composed of corporate capitalists owning the factories, banks, financial institutions, communications and transportation. They control the lives of every worker. The purpose of the presidency is to maintain the capitalist system. It enforces the rule of the powerful over poor and working people. Biden won’t change all this – or any of this. He is just a representative of this ruling class and won’t have the power to change it. What he can do is run the state apparatus better or worse for the ruling class. Biden’s program amounts to is little more than sugar-coated Republicanism. It doesn’t really solve problems – it just temporarily patches over them.