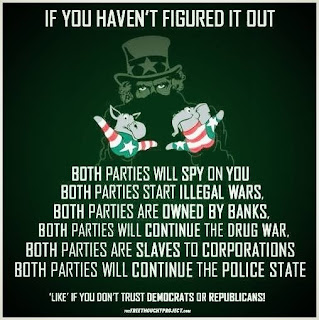 Workers everywhere have an underlying common interest around which to unite. Capitalism, in contrast, is fundamentally anarchic; the capitalists cannot overcome their divisions. The coronavirus pandemic and Black Lives Matters protests have showed the enormous hatred growing against the horrors of capitalism. That hatred has to be turned into dedication to overthrow the entire capitalist system.

Labor has no voice in nominating the candidates. Labor has no say in drafting the platforms. Labor will have no control over the victorious politician. The lords of commerce and barons of industry rule.
The capitalists understand this clearly. American labor will be suckered again in the 2020 election. Big Business possesses two parties under its control, with one always in reserve when public dissatisfaction has temporarily exhausted the other.

Our task is to organize the labor vote for socialist candidates rather than for the candidates of Wall Street. The myth that Biden is a “liberal” continues on, despite all evidence to the contrary. It is carefully nurtured by the media monopoly. Whatever the rhetoric emanating from the progressive left, corporate America, the banks, Wall Street and the hedge funds can be sure that the Democratic Party remains in safe hands with Biden and Harris. Even Sanders concedes, “it’s Wall Street that regulates Congress.”

The progressives have one great choice before them from now on. Two roads remain before them. They can take the road of independent political action, or they can continue the present policy of tying themselves to capitalist politics, which in essence means support to the political representatives of the economic rulers whom it fights on the economic field. It would mean a sharp break with capitalist politics and its organizations. How many times must labor have to repeat its experience with the two old capitalist-dominated boss parties, before it learns that nothing can be gained through playing ball with them? Democrats have joined the Republicans in protecting the interests of employers. The side-lining of Sanders should have been instructive to those who still believe that the Democratic Party can be transformed into a “party of the people,” or that labor can defend and advance its political interests without building a new party of its own.

The working class should not support any of the presidential candidates, as none offer any program which would benefit the working people of the United States.

The policies advanced by Trump and Biden differ only in superficial respects. Both would continue the assault on the living standards of working people, boost corporate profits, continue to slash social services and take back reforms won through hard struggle over the past years, and step up U.S.  war preparations.

This year the Democrats and Republicans have never looked so similar, with both reflecting the conservative mood within the U.S. ruling class. When the voters enter the voting booth they will face no real choice other than the different candidates’ personalities. The working class should reject the big business candidates and their common programs of economic austerity, repression and war preparations. Working people must reject the “lesser evil” argument for Biden (or for Trump, for that matter) – there is no such thing when the choice is between chickenpox and measles. The “lesser evil” fallacy serves only to underestimate the danger of the poison you pick, and keeps the masses chained to the bourgeois political system and its two parties. By not voting for any candidate working people will register their rejection of the big business candidates. Voting in the presidential election would only strengthen the two-party system and hold back the process of forging a political trend independent of the elite. The presidential office is the highest in the land, and is therefore controlled most tightly by the Big Business

The word on every politician’s lips in this election season is “change” but nothing will change, despite millions of working class people desperate for relief from years of hardship, hope the elections will make a difference.

Elections are always difficult for capitalist politicians. They must appeal to the workers for their votes while reassuring the ruling class that its interests will be protected. The more the candidates can find a theme that can unite the working class behind capitalist interests, the better. In these elections, the vague promise of “change” has fit the bill perfectly, since the ruling class itself is for the most part desperate for a change in government. Of course, the workers have a very different idea of what “change” means.

The answer to this world of exploitation, oppression and war is working-class revolution that will overthrow the capitalists and their profit-driven system and build a socialist world of freedom and abundance. We don’t have to take what the powers-that-be give to us. We can create a new politics. Readers interested in an alternative to the parties of capital in the Capitol may look at the WSPUS website.