The Greatest Show On Earth

The Donkey and the Elephant are now preparing for the dress rehearsal of the greatest puppet show, the last act of which is scheduled for November 3rd. How long can this illusion be sustained with the puppet show becoming more and more unconvincing?

We need a steadfast political party willing to stand up and be crystal clear about its allegiance to the interests of the working people and to oppose the corporate controlled parties. Most working people will not even vote in November’s election circus. And those who do will vote for the lesser evil and against whomever they consider the greater evil, not for someone they believe will improve their lives. Working people need our own political party. We need to rely on our own actions to defend past gains and to win new ones. We have no friends or allies in either of the two major capitalist parties.

It is a conscious deception to characterize this order of things as the “lesser evil”. Because the “lesser evil” Biden is being tolerated by the Left and not fought by it, he becomes an ever “greater evil” himself and is enabled thereby to prepare for the “greatest evil”.

Trump blaming immigrants for capitalism’s economic problems as a whole helps prevent class-wide resistance. It is not just words. The vast federal bureaucracy such as ICE that oversees immigration control, as well as the state and city police forces, have as one of its chief duties the intimidation of immigrants to show who is boss and inevitably results in brutality and sadism.

For labor, there is no difference between the Republican and Democratic Parties. They both believe in capitalism and are defenders of the profit system and the rights of capitalists to exploit labor. Sure the two parties differ to some degree in the details of their schemes for managing the business of exploiting the people. Nevertheless, the difference here also is largely on the surface. And also for sure the electoral contest between these two parties is not without social significance. For one thing, the business of government has become the biggest of all businesses, and there is a genuine rivalry in determining who shall have the right to its profits.

But of more importance is that the presidential election is a major means for spreading illusions among the population, for preventing working people from understanding what the true issues of modern society actually are. Exaggerating the appearance of differences between the two candidates aids the bosses in sustaining the belief on the part of the people that it is a vital question for them whether the next president is Republican or Democratic. Thus we are all hindered from learning that the only political struggle of real importance for them is the struggle not against one or another of the parties, but against the system and the state itself in its entirety, for the overthrow of capitalism.

Why do so many minorities support Biden and even see him as an ally under attack by racists? It is not out of stupidity or ignorance. It is always which candidate will do us the least damage and maybe some good. The lesser evil. Biden is seen as a friend because of the forces attacking him: opponents of every gain won by the civil rights movement. The Democrats have turned to a new strategy to stave off the growth of apathy and cynicism.

The fusion of economics and politics in present-day capitalist society makes it evident that labor cannot fight a merely economic battle, defensive or offensive, for its rights. The increasing intervention of the capitalist state in the economic life of the country has shown how archaic is a purely “bread and butter” struggle, since the economic gains of a generation of workers can be wiped out overnight by a single legislative act. “Bread and butter” struggles are insufficient; they have to be linked with broader social and political concepts. Labor need to declare its political independence. It needs to organize a party of its own and to break, once and for all, with capitalist politics. If it is to win the support of  the disillusioned workers it will have to challenge the economic and political power of capitalism and truly represent the interests of the working people. Liberal and progressives to-day endorsing the candidates of the Republican or Democratic parties, will ever mean the betrayal of labor to-morrow.

For us there’s no choice between the Republocrats and the Demopublicans. In politics, we don’t believe in choosing the “lesser evil” over a greater evil, when such a choice exists But these two parties are both monstrous evils for the working people. We choose instead something good for working men and women: A SOCIALIST PARTY!

Our attack must be against capitalism; our struggle must be for socialism!  The class-conscious development of the working class will then begin. 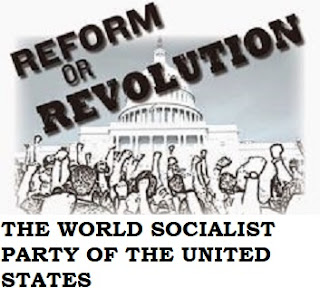