Having their cake and eating it too 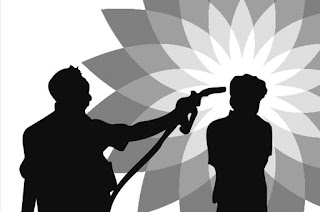 Earlier this year, both Shell and BP announced in almost identical language their "ambition" to be net-zero emissions businesses by 2050. In recent years they have also very publicly quit numerous industry trade groups that fund denial of anthropogenic climate change or that fight legislation or regulation of greenhouse gas emissions, while pledging to be more transparent about their associations with lobby groups.

Both companies support the Alliance of Western Energy Consumers, which boasted that it had "defeated carbon pricing bills" in Oregon, and the Texas Oil & Gas Association, which is fighting regulation of the super-heating greenhouse gas methane in the nation's largest oil-producing state.

Shell and BP also both back the Business Council of Australia and the Australian Petroleum Production and Exploration Association, both of which are working to undercut the country's compliance with the Paris climate agreement.

Shell also remains a member of the Queensland Resources Council, which is backing construction of the world's largest coal mine in the northeastern state.

The companies say they are trying to reform the lobby groups from the inside.

Last week, a report from Oil Change International stated that none of the plans or pledges from eight leading oil companies including Shell and BP even come close to aligning with the 2015 Paris agreement's goal of limiting global warming this century to 1.5 degrees Celsius.

Robert Brulle, researcher and professor at Brown University's Institute at Brown for Environment and Society, explained,  "This is a standard business practice. They're trying to have it both ways, being socially responsible without changing their actual positions."