From election to revolution 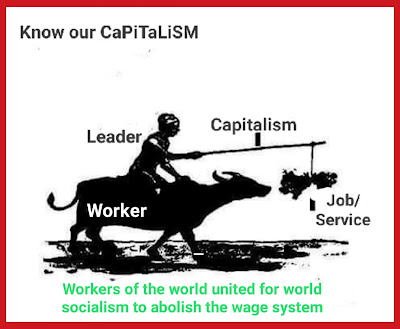 The Demoncratic Party is not a left party, not a social democratic party and not even a liberal party. They may differ on several issues from the Republicans, but mostly they survive by creating a false dichotomy. They always find issues to sell Demoncratic voters which are not consistent with their track record and which are only believed because of their undeserved reputation in certain areas. In this, the mainstream media is often complicit. The last time the Demoncrats were in power in the US, exactly just how many people were killed in military actions and as a result of economic sanctions?

First of all, the World Socialist Party has nothing against voting as a mechanism, as a method to decide practical matters, as it is making some decisions once the different positions have been debated and exposed, or as it is the election of some delegate or representative. What’s really important is the context where this mechanism is exercised. Socialists are not against “elections” even if in local or national elections we call not to vote, because of the context in which this vote is exercised. When within the framework of the State, to validate and legitimize the domination of the ruling class over us and we are excluded from decision making then we call for people not to vote in that kind of election. What we are really calling for the votes to be against State and capitalism, not against “elections” as an event. Our opposition, so, is not so much against to voting but it being used to endorse the lesser evil.

Does this mean to be indifferent to elections? Does it mean not to take a stand? Not at all. Our real work is to show, through campaigning, that this system should and ought to be changed, focusing, before anything else, towards strengthening the class struggle and the popular organization of people. Not participating into elections cannot be considered one of the political tenets of socialist revolutionary militancy. Today it is as necessary to build a path for those who seek to take part in the struggle against the capitalist system. Politicians are only interested in two things making you afraid of something and telling you who’s to blame. Both Trump and Biden indulge in fear-fanning and blame-naming. Invent the threat. Point the finger. Create toxic anxiety.

Do we decide who we vote for on personal or sectional interests and then perhaps the lesser evil applies, but if we vote for our class, a class that transcends national boundaries, then the question is more complex. It is perhaps an observation that it is often difficult to distinguish class interests due to the inevitable clashes within the workers' movement that the WSPUS approach is the more prescient. Only campaign for socialism and nothing else - there the class interest is clearly expounded.

And it is rarely ever crystal clear in lesser an greater evils. Weren't we tempted to vote for Woodrow "he will keep us out of the war" Wilson, only to be deceived soon after.

Capitalism runs politicians, not the other way around. Much importance is put in voting since the "democratic" claim of many states in the capitalist world rests on the franchise; the ability of the population to vote for representatives that will then staff the state apparatus.

Achieving the franchise was a hard fought struggle by many groups who were marginalized by states, thus not considered "full citizens". Most people in democratic states would probably assume that they have some amount of control over state policy because of their right to vote. Radicals argue for "lesser evil voting", or "voting as harm reduction". The idea behind this is that if we get a choice between politicians and we can determine which of them will carry out the least, or most anti-social policies, then we should vote for the former. This "harm reduction", or "lesser evil" approach. If radicals really want to make a difference in people's lives, here and now, to "reduce harm" then they have to reckon with their illusions about what capitalism and the State will give them and involve themselves in the class struggle with the victims of capitalism. There is no short-cut, no alternative. One old white politician is not going to be better for them than another old white politician. Anti-Trumpism is the politics of lesser evilism. It subordinates everything to the removal of an enemy that makes all other enemies look acceptable, even those hitherto deemed the most unacceptable. When 'anti-Trumpism' becomes the main basis for a groups activity and relationship with other organisations then it becomes something to criticise and oppose.

it is no part of the Socialist Party to administer bourgeois government more efficiently. It is their business to destroy capitalism, and on the ruins of that system found the free communes of the socialist commonwealth.