"We cannot trade Mother Earth in a market system.” 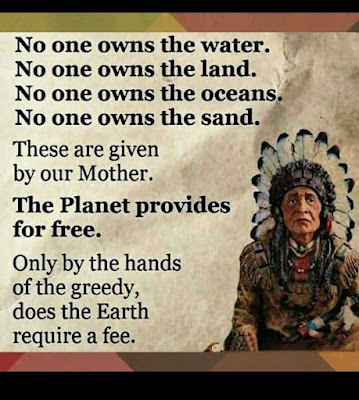 The desire to do something about climate change and global warming should not blind us to whether proposed solutions are actually feasible, or might generate unintended consequences.

Carbon offsetting has been criticised by Tom Goldtooth, a prominent activist within the Indigenous movement, as “part of a system that privatizes the air that we breathe”.

Carbon offsets are a set of schemes that allows companies, but also individuals, to buy credits from different environmental projects - such as tree-planting, or solar and wind farms - to substitute for their own carbon footprints. These schemes can often involve large carbon sinks, such as tropical rainforests, in developing countries.

Tom Goldtooth, executive director of the Indigenous Environmental Network, explained “It allows polluters to buy and sell permits to pollute instead of cutting emissions at the source. It lets governments and corporations pretend they are doing something about climate change, when they are not." He went on to say, “In our traditional knowledge we know that we cannot own the sky, we cannot trade Mother Earth in a market system.”

Mr Goldtooth, who is Diné and Dakota, has organized around Indigenous issues for the past 40 years. He won the 2015 Gandhi Award and 2016 John Muir Award for his decades of defending Indigenous rights to a healthy environment and combatting fossil fuel projects. He travelled to Glasgow's COP26 with a delegation representing 15 different Indigenous Nations from Canada, the US including Alaska and Brazil. Mr Goldtooth has attended Cop summits for two decades and says Indigenous peoples still remain at the fringes.

“We’re here and we still don’t have a seat at the table,” he said. “In some areas [of the venue] we don’t have access, and they’re very critical in terms of negotiations. So we’re forced to try to grab people in the hallways.”

Indigenous protesters gathered outside the main turnstiles into the Cop26 venue. The group held up copies of the Financial Times, where they had secured a full-page ad that read: “Carbon offsetting is tearing us apart.”

“We need real reduction, and to keep fossil fuels in the ground,” Mr Goldtooth said. “Carbon offsetting perpetuates the theft of Indigenous people’s land and our territories. Our brothers and sisters have been protecting their lands and forests for thousands of years. Carbon offsets are a new form of colonialism.”

Mr Goldtooth said that the focus on net-zero emissions was “false and clearly dangerous” compared to absolute zero emissions.

“It’s very vague. it hasn’t been clearly defined. It’s got too much risk to it,” he said. He said national governments and corporations continue to push “false solutions” such as carbon capture and storage and solar engineering. “These technical fixes violate the natural laws of the atmosphere, of the sky, of the Mother Earth, all that delicate, harmonious structure,” he said.

He compared the world, particularly the industrialized countries in the North, to a drug addict, and said they were “addicted to the combustion of fossil fuels”.

“I think the world is addicted to energy. It can’t wean itself from this addiction to consumption and also the creation of waste. My fear is that they will continue to burn to the end of the earth,” he added.

“I was hopeful that maybe with this Democratic president [Biden], we might be able to get some things going for ourselves as Indigenous peoples, economically as well,” Mr Goldtooth said. “Around climate policy, I was hoping for something better. He made so many promises on his road to presidency that he was going to tackle climate change and end fossil fuel investments on public lands. He’s lying. He said that he was going to recognize Indigenous rights [but] he’s continued to perpetuate a legacy of broken treaties. Many members of our network that are here don’t trust this person.”

Posted by ajohnstone at 7:31 pm