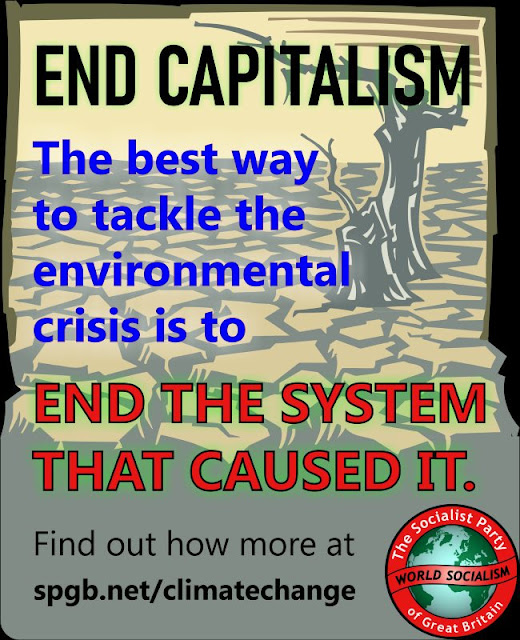 100,000 marched through the streets of Glasgow on Saturday demanding that “something” is done about climate change. Many, many more protested in other cities around the world.

The global warming crisis as depicted by mainstream media is narrowly conceived and identified most basically as driven by excessive emission of greenhouse gases caused by humans as the result of bad choices made by the economy by humans. The solution is simply to choose a different set of policies that do not lead to excessive emission of greenhouse gases. The changes necessary therefore does not require any systemic restructuring of human society merely some adjustment of its priorities. The problem, however, is far deeper. Capitalism is the cause of the ecological crisis we face.

The World Socialist Movement (WSM) seeks to dispel the mistaken idea that this environmental crisis is an exception and simply the result of an aberration within the otherwise rational order of the world market and profit accumulation. The system of capitalism must be placed at the centre of any explanation as to the cause of the abuse and destruction of nature. This means accepting that replacing capitalism role as the world’s economic structure is vital and crucial to any answer to the climate emergency

The answer cannot be one of the integration of nature into ‘green’ capitalism and ‘green’ solutions marketed for profit. Capitalism has fully exposed the system’s destructive consequence to nature, guaranteeing food insecurity, driving small family farmers out of business, off the land and frequently into starvation. Socialism is indispensable to any real solution to the environmental crisis.

Without the vision of a better world and the organisation to change things that go with it, the protests of the green campaigners will go nowhere. We are running out of time and soon there may well be no future at all

Capitalism is the real enemy, not people themselves. Capitalism is overwhelmingly the driver of planetary ecological collapse, from climate change to resource depletion to pollution. Today, a roaring out-of-control economic system is cutting down forests, sweeping clean oceans and seas, gouging out mountains for minerals and ores, pumping toxic effluents into rivers and out lakes, devouring destroying fragile ecosystem built up over millennia. Capitalists and corporations aren’t totally evil, (although many are), but they can’t stop themselves. They’re just doing exactly what they’re supposed to be doing for their shareholders, returning dividends and raising their stock prices. That’s what is demanded. The conglomerates can’t end poisoning and pillaging, looting and polluting, trashing the planet into one giant global land-fill site. All that matters is senseless business growth, regardless of the ringing of alarm bells or the sight of red warning lights.

Solutions to the ecological crisis are blindingly obvious but don’t make “economic” sense to the investors’ logic.

We all know the answers. Stop excessive greenhouse gas emissions. Cease wasteful consumption of resources. End the harmful pollution of the soil, water, and air.

We don’t need any new technology to solve these problems. We just need to halt doing what we’re doing. But we can’t because of being locked into an economic system in which companies have to grow to compete and reward their shareholders.

Our aim is a society that serves the welfare of humanity and the well-being of our environment. The WSM offer no blueprint here or anywhere else for the society we dare to imagine and seek to build other than to help organise the large majority of the population toward this goal. We are living in terrifying times and no-one knows what seeds will take root.