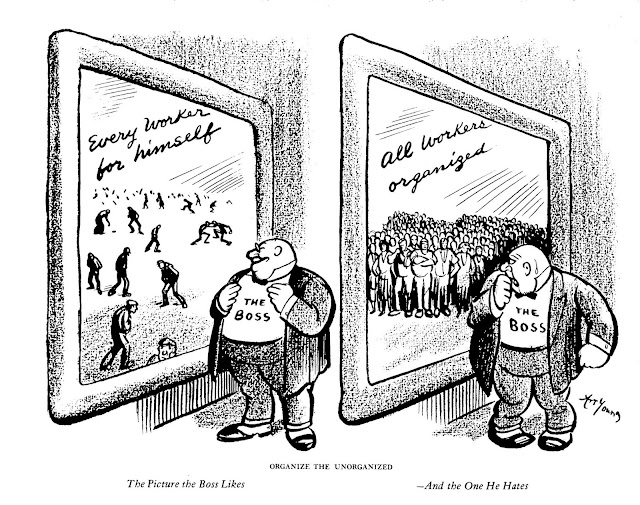 It is a safety net

Last year, 10.8% or 14.3 million workers, belonged to unions according to the Bureau of Labor Statistics. Another 1.7 million workers were covered by a union contract though they did not say they were union members. Union membership was down in 2020 from 20.1% or 17.7 million in 1983, the first year with comparable data.

Union membership increases the household wealth for workers overall, according to a report by the Center for American Progress, a progressive think tank, which analyzed data from the Federal Reserve’s Survey of Consumer Finances from 2010–2019. It gives a particular boost, increasing earnings, offering access to retirement savings and bolstering other benefits essential for financial security, according to the report.

White union households had almost twice the median wealth of white households that did not include a union member, according to the report, which analyzed the survey data gathered from thousands of U.S. families who answer questions about their earnings, balance sheets, benefits and demographics.

But the difference in wealth was most striking among some workers of color, the report concluded, with Black union households having three times the median wealth of Black families without a union member,

And Hispanic union households having five times the median wealth of their non-union counterparts.

David Madland, senior fellow with the Center for American Progress and co-author of the analysis, explained, "Unions boost wealth for everyone .. but they provide even more of a boost for Black and Hispanic households, and because of this greater boost they help close the racial wealth gaps in a significant way.''

The analysis from the Center for American Progress is also in line with data from the U.S. Bureau of Labor Statistics and other studies that found union members make more than those not in unions and have more access to employer provided health insurance.

And an August 2016 review of the Current Population Survey by the Center for Economic and Policy Research (CEPR), a progressive think tank, found Black workers who belonged to unions earned wages that were 16.4% higher on average than their Black peers who were not in unions.

A September 2008 CEPR survey of the data, which is compiled by the Census Bureau and Bureau of Labor Statistics, found union membership increased Latino workers’ wages on average by 17.6% as compared to their peers. And Latino union members were 26% more likely to have employer-provided health care than their Latino counterparts who were not in unions.

“The differences in household wealth for Black and Hispanic households are largely due to the retirement benefits and job stability afforded by a union contract,’’ says Misael Galdámez, research analyst for social mobility and economic opportunity at UCLA’s Latino Policy and Politics Initiative.

"This is a lot more dollars in people's pockets and bank accounts that we're talking about,'' he says, adding that those additional resources can fund a child's college tuition or seed a rainy day fund.

Union members are also more likely to have a pension or other high quality retirement benefit, as well as employer provided health insurance, both pillars of financial security, Madland says.

"Retirement is a key way people accumulate wealth over their lifetime and health insurance is a way to protect the wealth they accumulate so if they go into the hospital they don’t eat into their nest egg as much,'' he says.

"What unions do for job stability is they provide an avenue for workers to have a discussion about workplace conditions which tends to mean that the environment is better and workers want to stay longer,'' Madland says. "And they have protections. The employer can’t just fire them for no reason.''

'I joined as soon as I was hired': Black, Hispanic workers benefit from unions, study shows (yahoo.com)