Change the system not the government 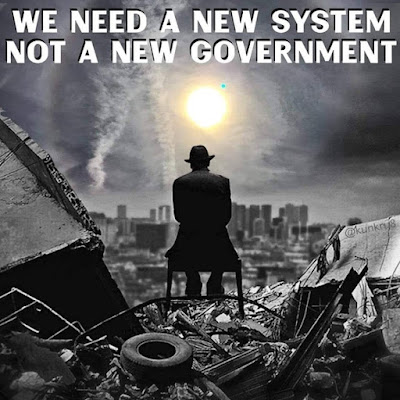 Governments can’t overcome the exploitative cost-cutting logic of capitalism and it is that which lies at the heart of the environmental crises. Capitalism is only concerned with short term profits; and the collateral damage costs to the environment are simply “externalities”, as the economists call them, a price to be passed on to society as a whole and not the responsibility of the culpable company.

There is no future if we cover up climate change remedies. Capitalism has inflicted incalculable harm on those that live on this planet. Tragically, capitalism’s destructive power, driven by its inner logic to expand, is doing irreversible damage to life in all its forms all around the globe.

Rosa Luxemburg famously said that humanity had a choice, “socialism or barbarism.” These days, her warning has even more meaning as we almost daily hear of species extinction, deforestation, desertification, and extreme weather events, to the point where many are almost in acceptance of an impending catastrophe.

Our planet cannot indefinitely absorb the consequences of profit-driven, growth-without-limits capitalism. Unless we radically change our methods of production and pattern of consumption, we will reach the point where the harmful effects to the environment will become irreversible. Only the most modest and mild measures of environmental reform are agreed by all sections of the capitalist class. This makes the establishment of a socialist society all the more imperative.

Pledges at this year’s climate summit to cut carbon emissions are likely to fall far short of the targets needed to avoid heating the planet by more than 1.5C or 2C.

So much information about climate change now abounds that it is hard to determine the accuracy of all the statistics and figures. So many scientific reports appear alongside unverified claims with academic appearances. What we do know is limited progress has been achieved to curb carbon emissions and curtail global warming while the scale of climate connected natural disasters continue to unfold at an unprecedented rate.

The situation is particularly bleak for those nations least able to cope with floods and droughts. How could it be that a species so intelligent, flexible and well-able to adapt could potentially destroy itself?

What happens next is somewhat speculative. Humanity isn’t so much sleep-walking to disaster as racing headlong to meet it.

Our ultimate survival will be predicated entirely on our choices – will we stay committed to the capitalist system or shall we embrace socialism. If there is to be a future for the human family, it can only be a socialist one. We must oppose an economic system that magnifies greed and encourages short-term thinking while pretending there are no physical limits to capitalist expansion and growth. To continue capitalism is to make a suicide pact.

Bandying words around without fully comprehending their meanings isn’t fruitful. Capitalism is the social system under which we live. Capitalism is primarily an economic system of competitive capital accumulation out of the surplus-value produced by wage labour. As a system, it must continually accumulate or go into crisis. Consequently, human needs and the needs of our natural environment take second place in this imperative. Capitalist investors want to end up with more money than they started out with. Capitalism is an ever-expanding economy of capital accumulation. In other words, most of the profits are capitalised, i.e. reinvested in production, so that production, the stock of means of production, and the amount of capital, all tend to increase over time. The economic circuit is thus money - commodities - more money - more commodities, even more money. This is not the conscious choice of the business owners or CEOs. It is something that is imposed on them as a condition for not losing their original investment. Competition with other capitalists forces them to reinvest as much of their profits as they can afford to in keeping their means and methods of production up to date. As a result, there is continuous technological innovation. Defenders of capitalism see this as one of its merits and in the past, it was insofar as this has led to the creation of the basis for a non-capitalist society in which the technologically-developed means of production can be now—and could have been any time in the last 100 years—consciously used to satisfy people’s wants and needs. Under capitalism, this whole process of capital accumulation and technical innovation is a disorganised, impersonal process that causes all sorts of problems—particularly on a world-scale where it is leading to the destruction of the environment.

The World Socialist Movement does not pretend that we are in possession of an elaborated plan for all the problems that we shall inherit and which we can implement immediately. But lacking a fully worked-out blueprint doesn't justify accepting the current economic system that assaults the living world. Capitalism is not the system through which we will shape a sustainable future. It is only fantasies found in economics textbooks that it can and deal with the real world. Capitalism concentrates wealth, it centralises power that allows a small number of people to dominate and determine not only economic but also political decision-making. Socialism is committed to principles rooted in solidarity and democracy.

If the future is not environmentally in balance, there will be no future. If the future is not socialist, it cannot be sustainable. We can restructure our world along with new understandings of ecology and economics and we can salvage something worthy from today’s society. But it will not be achieved if we continue business as usual.

When a green campaigner says, "All that matters now is a focus on sustainability and renewables", we must make it clear that such an aspiration is impossible under capitalism. We require economics based on cooperation and solidarity, not capital accumulation and growth. 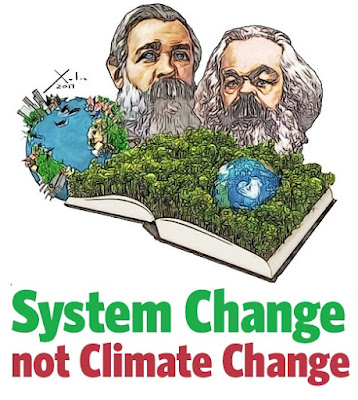