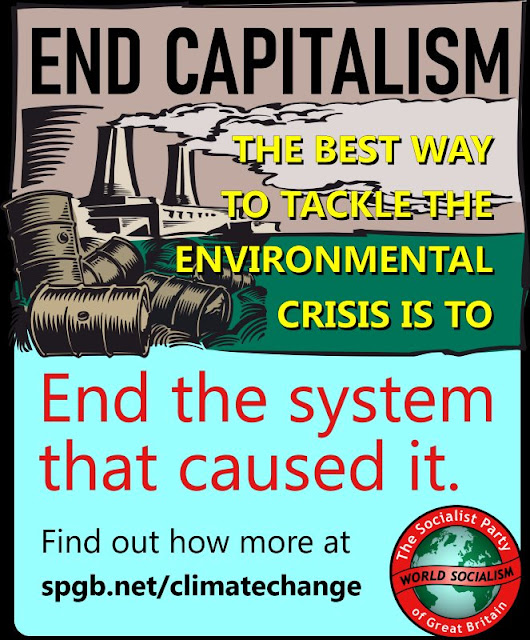 Year in and year out we release millions of tonnes of CO2 and methane gases into the atmosphere. Every year acre upon acre of tropical rainforests are destroyed or seriously degraded. So, at the same time, we are destroying the plant life that uses carbon dioxide and converts it into oxygen. The result is global warming. Many of the dangers are well understood but nobody knows for sure and nobody can predict with certainty the critical tipping points when any combination of such changes might produce a sequence of further rapid changes which would be catastrophic from a human point of view. It must be obvious that a set of problems that are global in scale, affecting populations across the entire planet, can only be effectively tackled by cooperation between all peoples. You can't have the world divided up between rival capitalist states — all riven by economic competition both within their boundaries and between each other and all driven by the economic pressures of profit and class interests, with a good many of them at actual war with each other — and expect to be in a position to solve the problems of the global environment. Effective action has got to be based on world cooperation.

To get the cooperation we first have to get rid of the present system which is based on economic competition. We need to establish a system based instead on common ownership, a world where all means of producing and distributing goods and all productive resources are held in common by the whole community. This means the end of the wages system through which workers are exploited for profit and the end of producing goods for sale so as to get that profit. It means people living and working in the community in a relationship of direct cooperation with each other, producing the goods and running the services that we need. This is a way of organising the community where the use of money will be entirely redundant.

If we establish common ownership, if we set up a society that is run solely for human needs as a result of people cooperating together, we are at last in a position where we can control our actions. Under capitalism, we are at the mercy of economic forces that nobody can control. Get rid of these economic forces and we are at last in a position to make democratic decisions about how best to use production for the benefit of the community.

Socialism is not the instant solution to problems but the means by which we can resolve problems. In socialism, we get the release of all productive resources — machinery, transport, raw materials, energy and labour — for the benefit of the community, but as, to start with, there will be a great deal to do we would have to make choices. We would have to make decisions in line with agreed priorities of action.

We've got to supply a lot more food, so that has to be increased. We've got to supply decent housing for everyone and that is an enormous world project. The mention of just these two priorities of action means that we would need a lot more energy and, as we know, the supply of energy is one of the worst villains in this problem of environmental damage.

It is clear that socialism will have to do two things at the same time: increase the supply of energy and do it in ways that protect the environment.

Do we keep on using nuclear generators knowing that inevitably this leads to what we do with their radioactive waste?

Do we keep on burning oil, knowing that oil is an immensely useful material that can supply thousands of very durable products? The burning of oil in power stations is in fact the kind of profligate waste that only capitalism could go in for.

What about coal, do we keep on burning it? There is no doubt that the burning of coal can be made less damaging by the installation of pollution-abatement equipment but it is expensive. In socialism, money would not be a factor. So we could if we wished to go on burning coal in a less damaging way and, of course, there are immense world reserves of this. Or simply,  we could agree to keep coal in the hole.

However, most people would agree that the most desirable way of producing energy is with the various renewable, benign methods such as solar, wind and wave power etc. This is clearly where the future lies.

Socialism would be free to go in for rapid development of these ecologically-benign methods. With the establishment of socialism, we will throw off the economic shackles of the profit system and break through into the freedom to use all our talents, skills and energies to solve problems through cooperation and collaboration.