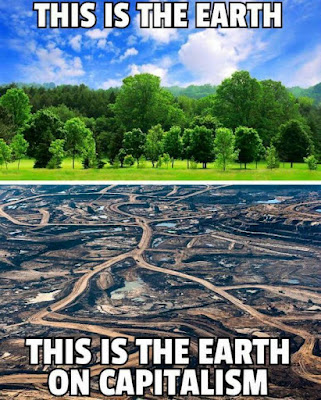 As humanity has evolved, it has had to alter the natural landscape around it. Even hunter-gatherer societies have had a profound effect on their immediate surroundings. For instance, the stark heather moors of the Scottish Highlands were once the thickly wooded Caledonian Forest.

The central climate question is not about renewable technology. Instead, it’s all about economics and politics. Increasingly numbers of studies and reports reflect the scientific consensus that we have to drastically cut CO2 emissions, and that is not happening sufficiently or soon enough. Demonstrations and protests by activists in the streets to pressure government action are good, but not enough. Greenhouse gas emissions remain a serious threat to mankind and capitalist society declines to slam on the brakes. While ecological necessity seeks a sound sustainable system, the commodified exchange economy needs growth.

Partial reforms can be fought for and some will be won. Such campaigns pit the people against powerful capitalist interests, and can lead to the understanding that the system itself must be changed, echoing a slogan that has become increasing heard within the environmental movement: ‘System Change, Not Climate Change’.

Many activists accept the idea that much of our environmental problems are due to humanity itself. They have chosen to call today’s times, the Anthropocene epoch, differing from previous eras being referred to by more appropriate names such as Stone,  Bronze, Iron Industrial Ages. Now it is blame-the-people and not use a more relevant term, capitalocene, to describe the state of our world.

Hunger around the world is not attributed to the type of our economic system being based upon production for profit but, rather, because the population is growing too quickly claims Paul Ehrlich or according to Garrett Hardin, our age-old culture and tradition of sharing the land and water in common, does not work:

2. It undermines its own productive base through erosion, disappearing soil fertility and increased salinisation, shortage of water sources and depletion of diversity.

3. It changes land-use patterns, encouraging deforestation, draining wetlands and planting crops according to market criteria even in unsuitable climates. It promotes a loss of crop diversity by specialisation and commercial seed production and reduces overall biodiversity through its chemical inputs and extensive monocultures.

4. It increases vulnerability to nature, especially to climate and microclimate change, pest outbreaks and atmospheric and water pollutants. This is because of large scale monoculture, the selection of varieties for maximum yield under optimal conditions and the loss of beneficial fauna and flora.

5. It makes farming increasingly dependent on inputs from off the farm. This means that cash flow becomes increasingly important as fertilisers replace natural nitrogen fixers, irrigation replaces the broken hydrological flows and storage of water, and also because pesticides replace natural enemies of pests and hybrid seeds must be bought. Dependence on external inputs increases the vulnerability to price instability and politically motivated trade policies.

6. It debases food quality as regional specialisation increases storage and transport time and crops and techniques are chosen for quantitative yield. Specialisation makes even farmers dependent on buying food.

7. It increases the gap between rich and poor. The rich are able to buy or get credit to buy, the new inputs, establish the marketing connections and average their returns across years. The poor, however, need to be successful every year. Modern agriculture especially undermines the economic independence and empowerment of women. The new technologies are usually given to men, even in places where women traditionally do most of the farming. The new technologies make the domestic chores of women, such as gathering firewood and fetching water, more time-consuming. Women’s diverse activities in the home conflict with the extreme seasonality of commercial monoculture.

8. It poisons people, first the farmworkers who handle pesticides, then their family members who handle the pesticide soaked clothing and drink water where pesticides and fertilisers have run into groundwater. Finally, it reaches those who eat the crops produced with pesticides and animals raised with antibiotics and growth hormones.

9. It also poisons other species, and the environment as a whole such as our waterways from fertiliser run-off, accumulation of pesticides in the body tissues of fish and birds.

Despite its technical complexity, modern agricultural technology has a narrow intellectual base susceptible to surprise. The final conclusion, therefore, is that commercialised, export-oriented, chemical-heavy agriculture is non-sustainable.

Only with world socialism will the benefits of science be given to all of the people of the world. Human society, when we get it, will be a free association of social individuals.