Capitalism - A Miserable System of Misery 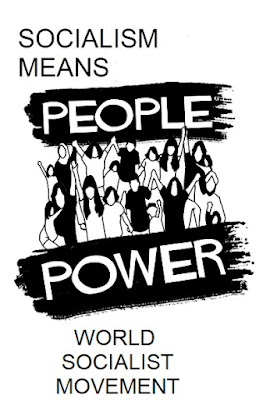 The world suffers from populations being displaced because of drought and storms and floods.

Capitalists worship quick and easy profit. There is no amount of wealth, no amount of profit, and no amount of market-share that is either ‘enough’ or ‘too much.

Because capitalism is the chief contributor to increasing climate change, the answer must be anti-capitalist and on that account, socialist. Humanity’s best chance of survival lies with world socialism. Those concerned about the climate crisis should understand that half measures aren’t sufficient solutions. A fundamental transformation of society as a whole is required. Green goals cannot be reconciled with a capitalist economy. An ecological steady-state between society and nature is incompatible with capitalism’s insatiable compulsion to grow. As long as environmentalists hold true to their aims they will always come up against capitalism’s barriers, thwarting their realisation. Campaigners cannot downplay or oppose anti-capitalism and should welcome and be receptive to socialist ideas. The conservative-minded politicians to stay electable have hi-jacked the environmentalist platform, sweeping this unpalatable truth under the rug, to win credibility with both the voters and their donors. Corporate values permeate all the major institutions of government.

The socialist analysis has been marginalised, discredited and unable to enter into the mainstream environmentalist debate. Our case for a sustainable society has been rejected and excluded from the scientific discourse. The World Socialist Movement not just explains the economic processes leading to environmental destruction, but also offers the strategy to change them. A  critique of capitalism is essential to challenge the current environmental crisis. The market promotes its own logic of production that facing competition from other producers, each business must minimise or externalise its costs while maximising returns and market share so to implement expensive environmental policies, they either sacrifice profit or lose market share to the competitor who can under-cut at a cheaper price in the marketplace. Any environmental protection is a cost in the commercial ledger which must be minimised. This fact operates independently of the personal views or ethics of owners or CEOs. The competitive market inevitably impedes any voluntary "green" initiatives.

Eco-activists can no longer adopt traditional conventional views of the market’s impact upon the climate issue by merely re-stating that the market is the central essence of modern society and thus sacrosanct. The response must now be the demand for a new economic system to supplant capitalism, to place the blame for environmental destruction back on the capitalist culprit, to direct attention to the institutions most responsible for the damage to our world.

This system cannot be reformed at it is based on the destruction of the earth and the exploitation of the people. There is no such thing as green capitalism, a PR advertising product that will not bring back the ecosystems that capitalism must destroy to make its profits. Ecologists must be revolutionaries.

One of the building blocks of socialism is "production for use, not for profit," "production for need, not for greed." Therefore, the imbalance is not built into socialism as it is under capitalism.  Socialism would mean organising human societies much in the manner the way that nature is organised. Capitalism robs us of community with each other and harmony with the Earth. Capitalism could be totally race and gender blind, indifferent to sexual preference, run by a government free of bureaucratic state officials, and there would still be an environmental crisis. Capitalism harms the environment because it is what it is.

While the World Socialist Movement can engage in a healthy discussion of how we should define and re-assess our ideas of the "good life", accepting some degree of decreased consumerism in Western cultures, we also maintain that a convincing ecological future must put forth a credible vision of abundance. Technology is the beast of the system that controls it and when it is used to oppress, it is by choice of the ruling class. New technology is not the threat, the capitalist class is. Technology is a potential source of prosperity. Most of the people in this world need more – not less — access to the benefits of technology.  Placing the blame for the climate crisis on technology masks the real cause of the emergency. The poisoning of the environment, the destruction of the forests and the extinction of species and the elimination of traditional forms of farming agriculture are propelled by class rule.