The total carbon footprint of the richest 1% will grow while that of the poorest 50% stays small, a study says.

Emissions of the wealthiest are on track to be 30 times higher than what's needed to stop the planet from warming above 1.5C, according to the study.

The poorest 50%, however, will be most severely impacted by climate change.

The super-rich - many of whom have multiple homes, private jets and superyachts - emit a lot more than others. A recent study that tracked the air travel of celebrities via their social media accounts found some emitted over a thousand tonnes a year.

But the global 1% are not just billionaires, or even millionaires - it includes anyone earning over $172,000.

This study also looked at the world's richest 10% - anyone earning over $55,000 - and found emissions were still high. The richest 10% will emit nine times more carbon than their share.

"A tiny elite appear to have a free pass to pollute," says Naftoke Dabi at Oxfam, which commissioned the study from the Stockholm Environment Institute and the Institute for European Environmental Policy. "Their over-sized emissions are fuelling extreme weather around the world and jeopardising the international goal of limiting global heating."

The richest 1% – which is a population smaller than Germany – are on track to be releasing 70 tonnes of CO2 per person a year if current consumption continues, according to the study. In total they will account for 16% of total emissions by 2030, up from 13% of emissions in 1990. Meanwhile, the poorest 50% will be releasing an average of one tonne of CO2 annually. 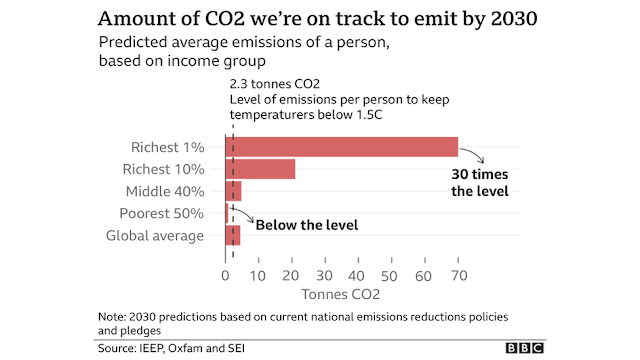 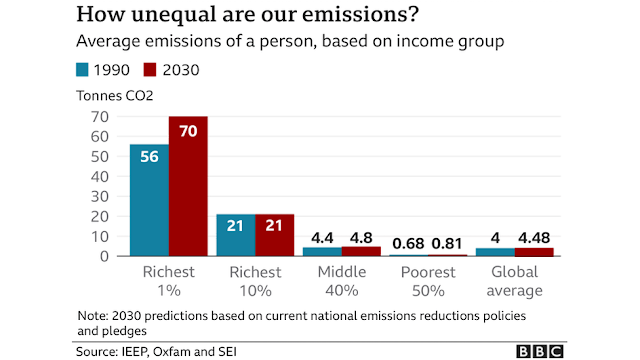 Posted by ajohnstone at 8:08 am