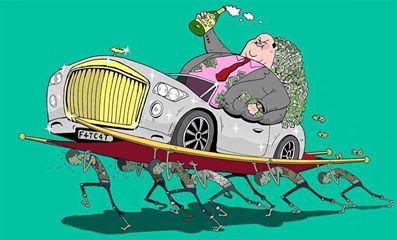 The remuneration of Australia’s highest-paid chief executives has exploded by an average of almost 70% in the past year.

Kogan boss, Ruslan Kogan, enjoyed the biggest increase among the top 50 highest paid executives, his pay skyrocketing from $594,000 to almost $9m this year – an increase of more than 1,400%.

On a take-home basis, CSL’s boss, Paul Perreault, pocketed $61m this year, boosted by a share price that has steadily risen over the past five years.

He said base pay had barely changed but short-term bonuses went up dramatically as share prices surged due to record low interest rates.

“The cynic in me says, is this a result of good, hard work, or is this just a result that very low interest rates are driving up the stock market?

There was no skills shortage among executive ranks, he said. He questioned whether company directors, who oversee the pay and performance of executives, “have the strength of character to be prepared to lose senior executives based on pay”.

“I don’t see it,” he said. “You don’t really see executives leaving from one ASX 50 company to go work as a CEO for another ASX 50 company, so it’s certainly not happening at the top end of town.”