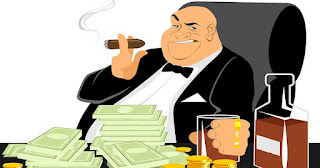 Private equity is also known as the “billionaire factory”, where already super-rich firms have used low-interest rates and their considerable financial firepower to embark on a multi-billion dollar buying spree this year. The money-spinning and highly secretive private equity industry – which buys up companies, often using more debt than stock market investors would tolerate, then floats or sells them on again.

The London firm Bridgepoint floated on the stock market and left 166 of Bridgepoint’s employees sitting on a combined £2.5bn windfall. The firm’s executive chair, William Jackson, sold £7.8m worth of shares, and hung on to a stake worth about £42m. Frédéric Pescatori, Bridgepoint’s head in France and southern Europe, cashed in about £16.5m and still had shares worth almost £85m. The finance chief, Adam Jones, sold £4m worth but retained shares worth £22.8m, following the stock’s 29% surge on its debut on Wednesday.

Bridgepoint also extended its largesse to well-known City figures persuaded to join the board. Archie Norman, chair of Marks & Spencer, received a £1.75m fee to become senior independent director (on top of his annual £200,000 fee for serving on the board). Three other non-execs, including Carolyn McCall, chief executive of ITV, were also handed £500,000 for joining the board.

Bridgepoint –  previously owning Pret A Manger and is now the owner of Burger King UK and the arts and crafts supplier Hobbycraft, and has a minority stake in the food chain Itsu among its £23bn of assets under management – is just one of dozens of private equity firms across the world reporting record-breaking returns as cheap debt and lockdowns, which have forced many companies to seek investment, have created the perfect conditions for deals.

Private equity firms have struck a record 6,298 deals worth $513bn (£373bn) so far this year – the most since records began in 1980. So far this year, PE firms have announced 124 deals for UK companies (both takeovers and minority stakes) with a combined value of £41.5bn.

In the paper, entitled An Inconvenient Fact: Private Equity Returns & The Billionaire Factory, Phalippou said private equity chiefs had paid themselves about $230bn in performance fees since 2006 despite on average achieving about the same return as a simple US stock market tracker.

“This wealth transfer from several hundred million pension scheme members to a few thousand people working in private equity might be one of the largest in the history of modern finance,” Phalippou said. He said the fees, which were ultimately paid by investors into private equity funds such as pensions, had helped turn 19 more private equity bosses into billionaires since 2005, taking the total number of private equity chiefs with nine zero fortunes to 22.