Patents and Profits is the Priority

The global humanitarian organization Doctors Without Borders (Medicins Sans Frontieres) said it is imperative that rich countries stop stonewalling negotiations over a temporary patent waiver for coronavirus vaccines as the ultra-contagious Delta variant ravages poor and under-protected regions. Just 1.32% of people in low-income countries have been vaccinated, compared to 50.15% of people in rich nations.

"It is outrageous to see countries blocking the TRIPS waiver that is desperately needed as an important tool to remove legal barriers and allow production to be scaled up by multiple manufacturers for critical Covid-19 drugs, diagnostics, and vaccines," Dr. Tom Ellman, director of Doctors Without Borders' Southern Africa Medical Unit, said in a statement Monday, referring to the WTO Agreement on Trade-Related Aspects of Intellectual Property Rights. "As many countries in Africa right now are reporting a high number of deaths due to the spread of new and existing variants of Covid-19," said Ellman, "these governments are in dire need of vaccines, diagnostics, oxygen, and other treatments to help save lives of critically ill patients."

He continued, "At a moment when we are in race against time to save lives and control the spread of unchecked transmission and development of new dangerous variants, pharmaceutical corporations' business-as-usual approach is intolerable," Ellman said. "With potentially promising treatments in the pipeline, opposing countries must stop filibustering the waiver proposal and support it to cover not just vaccines, but also treatments, diagnostics, and other health technologies."

First introduced by India and South Africa in October, the TRIPS waiver aims to boost global vaccine supply by temporarily lifting intellectual property protections that have barred manufacturers around the world from producing generic vaccines. While backed by more than 100 WTO member nations, the proposed waiver has been mired in fruitless talks for months as powerful rich countries—including Germany, the United Kingdom, and Canada—remain opposed to suspending patents, leaving much of the developing world without access to life-saving shots.

Campaigners have argued that by helping pharmaceutical companies maintain monopoly control over vaccine technology and production, wealthy nations are prioritizing corporate profits over ending the coronavirus pandemic, which has killed more than four million people worldwide. Rich countries and pharmaceutical giants emphasise vaccine donation pledges and bilateral production deals, but critics call such approaches piecemeal that will not be enough to manufacture and evenly distribute the 11 billion doses necessary to end the pandemic.

Indonesia, the world's fourth-most populous nation, this month overtook India and Brazil in the number of daily cases, becoming the new epicenter of the pandemic. Hundreds of children in Indonesia have died from the coronavirus in recent weeks, many of them under age 5, a mortality rate greater than that of any other country and one that challenges the idea that children face minimal risk from Covid-19. The jump in child deaths coincides with the surge of the Delta variant, which has swept through Southeast Asia, where vaccination rates are low, causing record outbreaks not only in Indonesia, but in Thailand, Malaysia, Myanmar, and Vietnam as well.

WHO Director-General Tedros Adhanom Ghebreyesus said that the international community must "spare no effort to increase vaccine supply" for poor countries that have been denied access for months as pharmaceutical companies sell most of their supply to rich nations.  Tedros continued. "This pandemic is an unprecedented crisis that demands unprecedented action. With so many lives on the line, profits and patents must come second." 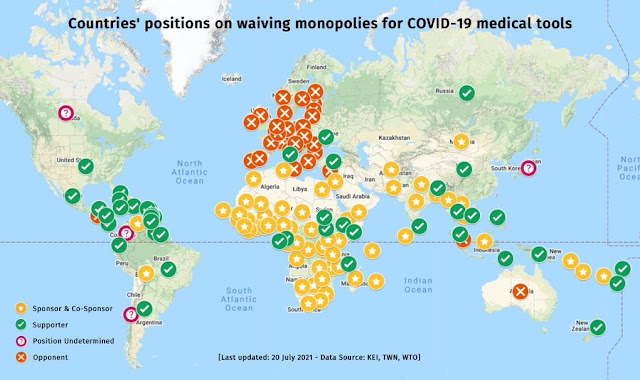 Posted by ajohnstone at 5:04 pm