Blaming the migrant in Australia 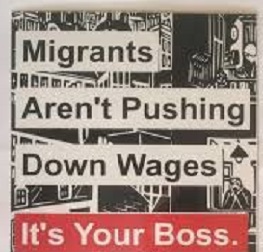 Migrants are the easy target as scapegoats for economic woes. It is not new. Blaming migrants for lower wages growth is easy and simplistic.

Last week, Philip Lowe, the head of the Australia Reserve Bank suggested migration could have caused lower wages growth. He commented the hiring of migrants brought in to deal with “specific gaps where workers are in short supply … dilutes the upward pressure on wages in these hotspots”.

This is not altogether startling, but he then added,  “...it is possible that there are spillovers to the rest of the labour market”.

The problem is, as Lowe noted earlier in his speech, “immigration adds to both the supply of, and demand for, labour”.

Essentially migrants increase the supply of people looking for work, but also the demand for things that need people to work to provide. In effect – both taking away and adding to the pressures on wages. Nothing in Lowe’s speech suggested that migration had a stronger impact on wages growth going down than up.

A number of economists were quite dismayed that the head of the central bank should stoke the anti-migration fires – especially, as Australian National University economist Ryan Edwards noted on Twitter, it goes against a vast majority of economic scholarship.

Most studies suggest migration has a positive impact on wages growth.

This is because migrants, as was noted in an article published in the Oxford Economic Papers journal in 2020, “perform complementary tasks, rather than substitutable tasks, in the labour market” – ie they don’t take your job, they work with or for you.

The positive finding is consistent with the landmark study led by ANU economist Robert Breunig in 2016 which found “almost no evidence that outcomes for those born in Australia have been harmed by immigration”.

A recent update by Gabriela D’Souza found that “wages are positively correlated with proportion of migrants” and “immigration has largely been a positive for incumbent workers”.

Even a study published in May by the Melbourne Institute which looked at the specific impact on youth workers found that young foreign students increase the competition for work for under 25s, but they also now have to compete with older workers who are staying in their jobs longer.

The government was reducing the budget deficit – in effect reducing demand in the economy – and all the while was arguing for smaller minimum wage rises and capping public sector wages.

We also had a collapse of the bargaining system, which reduced enterprise agreements and reduced strikes.

When the system makes it harder to bargain for wages rises, not surprisingly wages don’t rise as fast.