Canada is Arming Itself 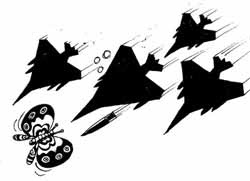 Canada amidst ecological damaging heatwaves and an economic destroying pandemic is planning to spend tens of billions of dollars on fighter jets.

The Canadian government wishes to buy 88 warplanes at an initial cost of about $19 billion but the full life cycle cost of the planes is said to be closer to $77 billion.

Canada has bombed Libya, Iraq, Serbia, and Syria. Many innocent people were killed directly or as a result of the destruction of civilian infrastructure and those operations prolonged conflicts and contributed to refugee crises.

Posted by ajohnstone at 1:19 am