A new study has found that many of the key indicators of the global climate crisis are getting worse and either approaching or exceeding, key tipping points as the earth heats up. Overall, the study found some 16 out of 31 tracked planetary vital signs, including greenhouse gas concentrations, ocean heat content and ice mass, set worrying new records.

“There is growing evidence we are getting close to or have already gone beyond tipping points associated with important parts of the Earth system,” said William Ripple, an ecologist at Oregon State University who co-authored the new research. “The updated planetary vital signs we present largely reflect the consequences of unrelenting business as usual,” adding that “a major lesson from Covid-19 is that even colossally decreased transportation and consumption are not nearly enough and that, instead, transformational system changes are required.”

While the pandemic shut down economies and shifted the way people think about work, school and travel, it did little to reduce the overall global carbon emissions. Fossil fuel use dipped slightly in 2020, but the authors of a report published in the journal BioScience say that carbon dioxide, methane and nitrous oxide “have all set new year-to-date records for atmospheric concentrations in both 2020 and 2021”.

In April 2021, carbon dioxide concentration reached 416 parts per million, the highest monthly global average concentration ever recorded. The five hottest years on record have all occurred since 2015, and 2020 was the second hottest year in history.

The study also found that ruminant livestock, a significant source of planet-warming gases, now number more than 4 billion, and their total mass is more than that of all humans and wild animals combined.

Ocean acidification is near an all-time record, and when combined with warmer ocean temperatures, it threatens the coral reefs that more than half a billion people depend on for food, tourism and storm surge protection.

In order to change the course of the climate emergency, the authors write that profound alterations need to happen.

The authors also highlight the need for a phase-out and eventual ban of fossil fuels, and the development of global strategic climate reserves to protect and restore natural carbon sinks and biodiversity.

Disappointingly, they suggest green capitalism has a role to play. They say the world needs to develop a global price for carbon that is linked to a socially just fund to finance climate mitigation and adaptation policies in the developing world.

But more importantly, the report concludes with this message:

“Policies to alleviate the climate crisis or any of the other threatened planetary boundary transgressions should not be focused on symptom relief but on addressing their root cause: the overexploitation of the Earth”.

Only by taking on this core issue, the authors write, will people be able to “ensure the long-term sustainability of human civilization and give future generations the opportunity to thrive”.

The SOYMB blog is optimistic that eventually and hopefully in time people will learn that the only way to a sustainable steady-state society is with socialism. 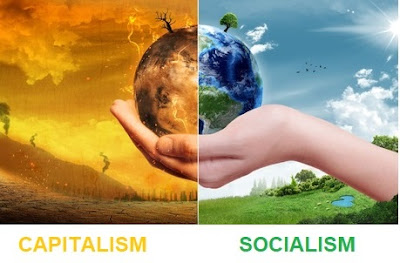 Posted by ajohnstone at 1:21 am