The Global Alliance for a Green New Deal 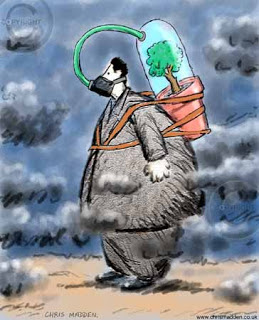 Each new day brings another panacea for our environmental emergency. Whether it is some proposed plan from political leaders or recommendations from the scientific community or the radical demands from the grass-root ecology activists, those of us in the Socialist Party despair at the assumption that the crises can be fixed without addressing the core problem - the economic system of capitalism.

The latest reform initiative is the formation of the Global Alliance for a Green New Deal is inviting “progressive” politicians from legislatures in all countries to work together on policies that would deliver a just transition to a green economy.

Governments may well introduce laws and implement policies to curb the assault on the environment. At best they can act only as palliatives, bringing temporary respite. Legislation and regulation most certainly cannot turn capitalism into an environmentally friendly society. The reality is that capitalism is incapable of solving one single social problem facing humanity, never mind curing climate change. We are more than capable of running our world on renewable energy, of feeding a world population twice the present size and housing every person on the planet, providing them with health care and education. To leave caring for the environment to governments or to hope that Big Business will see sense and turn to sustainable production methods is to misunderstand what the capitalist mode of production is all about. If we are to consciously harmonise our interaction with the rest of nature the only way which this can be done is through the common ownership of the means of production, by and in the interests of all people and the world they live in. A non-exploitative and non-hierarchical society based on the common ownership of natural and industrial resources enabling us to realise our full human potential is a description of socialism as we understand it.

There is no shortage of renewable energy resources on this planet. There is more energy available than mankind could possibly use. Total ecological and energy benignity is of course an impossible dream, but in socialism full discussion on all aspects will democratically take place before decisions on such matters as fuel and power, which have such all-pervading implications, are taken. With the competitive drive for profits removed, there will no longer be any incentive to produce untried products whose long-term or even short-term effects are toxic. Make no mistake, in the socialist alternative locked labs, secret research will be as impossible as money or markets. Socialism will be a society in which decisions will not be made by an owning minority or a state, nor will decisions be subject to the anarchic fluctuations of the market. Instead decisions on. for example, energy production, will be made by the whole of the community concerned. With the means of production the common heritage of all the people of the world, the scientific knowledge and technological skill which society now possesses can be used for the one purpose of satisfying human needs in accordance with the long-standing socialist principle “from each according to their ability, to each according to their needs”.

An important advantage that socialism would enjoy would be the freedom to select and use production methods strictly on their merits. It would not matter that a desirable method might use more labour than an undesirable one. The selection and use of production methods will be free to take into account a broad range of needs, including the enjoyment of work itself, care of the environment, conservation of materials, social safety and animal welfare. Capitalist society accentuates the demand for minerals in a manner that a sane society would think ludicrous. If there were fears of world shortages of minerals it would be doubly criminal to use them in the production of articles to kill, to restrict the freedom of, and to assist the exploitation of man by man.

The profit-led economic considerations of capitalism will be a thing of the past.  In a socialist society, the world will function as one productive unit, it may not be necessary actually to construct a worldwide grid. With the probability of people living in smaller communities with modern energy-efficient communications reducing transport requirements, we may well see these communities self-sufficient in energy, although some provision for emergencies will be required. The environmentally benign, renewable methods are in many ways better suited to smaller-scale operations, as shown to a certain extent by the instances where they are making headway at present.