Bumper Bonuses for the Rich 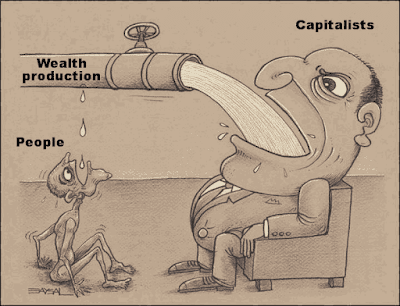 Bonuses paid to the UK’s bankers, insurance brokers and other financial sector workers have hit a record high and are rising more than six times faster than average wages in the UK, the Trades Union Congress said.

Its analysis suggested that the City’s bumper executive bonuses of the pre-financial crash era are back, even as much of the country struggles with a soaring cost of living that is outstripping pay rises.

Official figures showed bonuses in the financial and insurance sector grew by 27.9% over the last year, while average wages in the same period grew by just 4.2%. Nearly £6bn was paid out in City bonuses in March alone.

The average bonus awarded in the finance and insurance sector rose to £4,021 in the first three months of this year, up from £3,146 in the same period last year, TUC analysis showed. By contrast, average monthly pay in the UK rose to £2,413, up from £2,315. These figures put City bonuses at the highest since records began, dwarfing the average pay in almost all sectors. In March, finance and insurance bonuses were 2.4 times larger than the average worker’s basic monthly pay.

Frances O’Grady, the general secretary of the TUC, said: “There is no justification for such obscene City bonuses at the best of times – let alone during a cost-of-living crisis. While City executives rake it in, millions are struggling to keep their heads above water. Working people are at breaking point, having been left badly exposed to soaring bills after a decade of standstill wages and universal credit cuts. Ministers have no hesitation in calling for public sector pay restraint, but turn a blind eye to shocking City excess. It’s time to hold down bonuses at the top – not wages for everyone else.”

Real wages across the economy, adjusted for inflation, are down by £68 a month compared with a year ago. The situation is even worse for public sector workers, whose monthly real wages are on average £131 lower.

Last month the Institute for Fiscal Studies thinktank found that the return of bumper finance industry payouts meant the top 1% highest-paid workers were pulling further away from the rest of the UK workforce in the biggest boom in City bonuses and pay since the 2008 financial crisis.

Bumper City bonuses of pre-financial crisis are back, TUC finds | Executive pay and bonuses | The Guardian