We Stand for Socialism 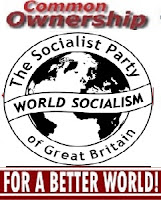 What is socialism? It is people collectively running society. Instead of being the prisoners of capitalist competition and profit at any cost, it is working together for the common good, democratically for the fulfilment of human needs. Many dismiss socialist ideas as Utopian, a good ideal but people are too greedy and selfish for it to work in practice. They forget that each and every day we live and work together co-operatively on a massive scale. They forget too, the mutual aid that is displayed in every disaster.

The Socialist Party says that it stands for the cooperative commonwealth and states boldly that the only issue for the working class is the abolition of the wage system to rescue themselves from their commodity status in modern society. And this is to be done only by a revolutionary organisation of the workers on the political field, not for reform (let us leave that to the capitalist reformers), but for revolution. We stand with the oppressed, with all those who seek a better world. The Socialist Party stands for a world which can eliminate poverty and hunger and war; a world in which freedom is more than a word in a textbook; a world in which the means of production are owned and controlled by the producers themselves and the products of mankind is available to all. We stand for socialism.

We live in a society which puts a price tag on everything. We live in a world torn by climate crises and wars. We live in a land where the great wealth are owned by a tiny minority. While working people  struggle to pay their bills, the economic elite bask in luxury. Governments support dictators and spends more on weapons of destruction than it does to eliminate poverty and hunger. We see little future in this society other than being doomed to dehumanising jobs and a culture which thrives on conformity and mediocrity. Democracy remains a word without meaning. We are cut off from the ability to make decisions affecting our own lives. The giant corporations determine all the key questions.

Around the world, humanity is saying "Enough" and is beginning to move. Athough our lives and conditions are different; though we live in different parts of the world; though our struggles take different forms; ours is a common goal—an end to the oppression and exploitation of man by man. Only when we have economic democracy, when production is planned for use and not for profit, when the right of all to share in the abundance of the Earth is established - only then will democracy be truly established.

How can the world be changed?

Certainly, no elite will accomplish the task. We do not want to replace one group of masters with another. Nor do we want the patronising assistance of those whose real interests lie with the present system. We must look to those whose interests lie in change—to the working people who work in the factories and offices of our society. They built the society—and they are cut off from power and progress by the tiny minority that owns the wealth. The bosses need the working people—but the workers don’t need the bosses. Despite the relative quiescence of the working people, it is clear that their very life situation forces them to come repeatedly into conflict with the system. They find themselves in daily conflict with the employers in the struggle for decent wages and security. The world’s peoples are clearly on the road to the most thoroughgoing social change in history.

A new world is being created—a world which will put people before money, which will create a participatory democracy at every level. The potential of mankind is virtually limitless if it is freed from economic and social oppression. We are part of the world community of socialists. We have no illusions that the way will be easy, no visions of quick success. But the future belongs to humanity and socialism.

Posted by ajohnstone at 2:41 am