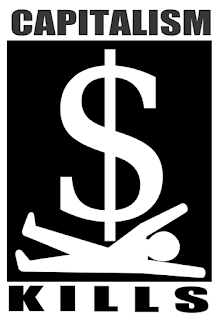 How much money would it take to bribe you to help kill 212,000 Americans in a single year?

What size incentive would cause you to assist in the theft of $543.6 billion?

Last year over 500,000 families were destroyed by bankruptcies caused by a family member getting sick

"In the United States, Lindsey, we spend twice as much per capita on health care compared to the people of any other country, while major countries like Canada, the U.K., Germany manage to supply health care to all their people. Why is that?"

The simple answer is the same reason we have an ongoing climate crisis - the legal bribery of politicians. These are real numbers. The bribery is real, the deaths are real. The bribes are so extensive, so widespread, so lavish that President Biden hasn't yet even seriously brought up the topic of Medicare For All or something like it.

The amount spent just last year bribing Congress to keep our healthcare system in place was $689,466,798.00. Almost three-quarters of a billion dollars.

In exchange, the health insurance industry took home $19 billion in profits last year, hospitals took home over $70 billion in profits, and the pharmaceutical industry made similarly huge profits last year: at least $100 billion. These three industries—that have a stake in keeping our healthcare system as broken and dysfunctional as possible—had handed out billions in compensation to their senior executives and board members. Not to mention stockholder dividends.

Health insurance in other nations is a marginal business around the edges used almost exclusively by the very wealthy to get private air ambulances and luxury suites in hospitals.

Drugs cost as little as a tenth of what they do here, and everybody in the other developed nations has health coverage.

A new peer-reviewed study published this week in the Proceedings of the National Academy of Sciences lays out a damning picture of the damage caused by the roughly $700 million a year the healthcare industry uses to bribe American legislators.

"We estimated," the study's authors say in the study's abstract, "that a single-payer universal healthcare system would have saved about 212,000 lives in 2020 alone.

"We also calculated that US$105.6 billion of medical expenses associated with COVID-19 hospitalization could have been averted by a single-payer universal healthcare system over the course of the pandemic.

"These economic benefits are in addition to US$438 billion expected to be saved by single-payer universal healthcare during a non-pandemic year."

Opinion | How Many Billions in Profit Is It Worth to Kill 212,000 Americans a Year? | Thom Hartmann (commondreams.org)

Posted by ajohnstone at 6:46 am