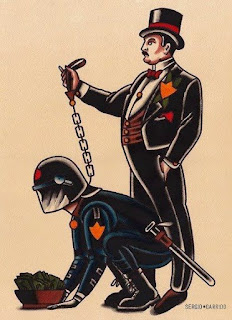 Labour Party leader, Keir Starmer, has again been distinguishing himself as a patriot. Bluntly put, Starmer regards it as the duty of Britons to sacrifice themselves in defence of their exploiters should the latter be challenged by the exploiters of any other country. In other words it says that the working class should be prepared to slaughter workers of any other country should their respective masters quarrel over the division of the spoils that has been stolen from the working class.

Every member of the Socialist Party knows that the problem of militarism—like that of unemployment—is inseparable from capitalism. Militarism is an inevitable effect of capitalist domination and the struggle for markets and profit, and so long as the workers are ruled by a master class, so long will their masters use them as cannon fodder. The only solution of the question of militarism from the proletarian point of view is the abolition of capitalist exploitation. It is then our duty to concentrate our efforts upon socialism, upon the triumph of those who labour.

The revolutionary socialist is the truest peace advocate. All socialists call themselves internationalists, and this, to every socialist, means to be in favour of the international union of the workers.

The patriotic left-nationalists say: ‘Present day nations, such as history has made them, are entities whose existence is useful to human progress. However imperfect they may be, however inhuman even they may be for working people, the latter have in each country the duty of defending them when attacked. We are internationalists, but if the country in which we chanced to be born is attacked we will defend it to the death’.

This in plain language means simply; ‘Workers of the world unite; but if your rulers order you to massacre your comrades, do so!’

If a wider war happens to break out over Ukraine between NATO and Russia, workers would have protested through the voices of their respective parliamentarians, proclaiming eloquently the fraternity between peoples  and, then, fraternally, the working classes would have gone to massacre each other.

The workers are ill-treated in every existing country.All nations are equal, or nearly so, in this respect, particularly now that the capitalist regime renders more and more uniform the material, intellectual, and political conditions of life for the labouring class in all countries.No country at the present day, is so superior to the others that the workers of that country should get themselves killed in its defence.

The Socialist Party is the only party of which it can be said that it advocates undiluted socialism. All the various problems that affect the working class hinge upon the ownership of the means of life, and yet outside of our organisation practically the whole of the workers’ energies are being directed against effects rather than to the removal of the cause of the trouble. The origin of poverty, war and slavery lies in class ownership of the means whereby the people live. The straightest road is the shortest road, and the only way to get rid of the evil of militarism is to get rid of capitalism.