The Labour Party shuns the workers 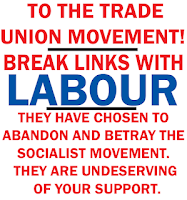 David Lammy, the Labour Party's shadow foreign secretary,  refused to back demands from airline workers for a pay rise of about 10%.

sked if he supported the BA check-in staff at Heathrow who have voted go to on strike over management’s refusal to reverse the 10% pay cut imposed during the pandemic and who are represented by Unite.

“Many of us might want a rise of 10%,” Lammy said. “In truth, most people understand it’s unlikely that you’re going to get that.” Asked directly if he supported the check-in staff of British Airways,  Lammy replied: “No, I don’t. It’s a no. It’s a categorical no.”

Asked what would happen to the Labour MPs who joined picket lines to show their support for the RMT rail strike, Lammy said that the shadow chief whip, would be speaking to them “and making it very clear that a serious party of government does not join picket lines”. Lammy said Labour was the party of working people, but that did not mean it should automatically side with workers against employers in a dispute.

General secretary of Unite, Sharon Graham, called his comments a “new low” for Labour, which could not be relied upon by working people.

Graham said that the workers were not asking for a 10% pay rise, but the restoration of money taken from them when pay was cut during the pandemic.

Graham said: “David Lammy has chosen to launch a direct attack on British Airways workers. This is a group of workers who were savagely attacked by their employer during Covid.”

BA and its parent company, IAG, had billions in reserves, and were predicting a return to profit this quarter, Graham explained.

She said, “Supporting bad bosses is a new low for Labour and once again shows that politicians have failed. It is now down to the trade unions to defend working people. We are their only voice.” Graham previously accused Keir Starmer of a failure of leadership after he ordered frontbenchers not to join RMT picket lines for the rail strike. “You don’t lead by hiding,” she said.

Mick Lynch of the RMT explained, “We’ve got the most peculiar economic situation in this country with full employment and falling wages. Covid has been a smokescreen for the rich and powerful in this country to drive down wages as far as they can.”

Lynch says it has been easier to negotiate pay deals with rail firms which are not under government control.

Posted by ajohnstone at 7:59 pm