Socialism is the best medicine 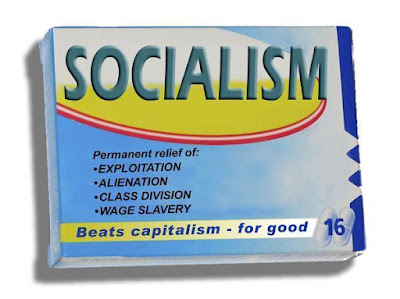 The United States is on the verge of moral, political, and material ruin. Corruption dominates the ballot-box, the Legislatures, the Congress, and touches even the judges and courts. The people are demoralized and disillusioned. The media is largely subsidized by the wealthy to ensure it is muzzled and public opinion silenced. Labor is denied the right to organize for self-protection. The fruits of the toil of millions are boldly stolen to build up colossal fortunes for a few and the possessors of those endanger liberty. From this social injustice, America has bred two classes—paupers and billionaires.  Increasingly events forebode terrible social convulsions, the establishment of absolute authoritarianism the destruction of civilization.

Working people have witnessed the struggles of the two great political parties for power and plunder, while grievous wrongs have been inflicted upon the suffering public. The controlling influences dominating both these parties have permitted the existing dreadful conditions to develop without serious effort to prevent or restrain them. Neither do they now promise us any substantial reform? They have agreed together to ignore every serious issue. They propose to drown the outcries of pillaged people with sham battles. Both parties are prepared to sacrifice our homes, lives, and the health and education of our children on the altar of Mammon so as to secure corrupt campaign funds from the billionaires.

Too many people are suffering unnecessary misery. Every person deserves the opportunity to contribute to society and in return to have their needs met. Capitalism makes it impossible to solve the problems it creates. The core purpose of capitalism is to create profit, not develop humanity’s potential. On the contrary, capitalism deny the majority any real control over their lives and the result is results: anger, anxiety and apathy. We live in a competitive, exploitive society where bosses are constantly thinking up new ways to enrich themselves at their workers’ expense.

The root cause of our problems today is not globalization but class divisions. Private property divides society into classes: the minority who claim ownership of the means of production and what is produced; the majority who labor to produce.  Over time, the form of class society has changed (feudalism, slavery, capitalism). Nevertheless, all class societies are based on private property, where the fruits of social production is kept in private hands.Because most of the world’s wealth is owned or controlled by a small group of people, everyone else must struggle to survive. The opposite of private property is socialism, or common control of society. There are no genuinely socialist societies in the world today. Not even one. Genuine socialism would abolish private property. People would continue to enjoy the possession of personal-use items; however, no one would be allowed to own the social means of survival, and thereby exercise power over others. Abolishing private property would end the class division of humanity and all of its miseries. The world, once again, would  be shared by all.

Capitalism is an international system, and it will take a worldwide  effort by the world’s majority to replace it. Once we have build that coordination, we will be able to solve problems like climate that small groups could never manage. World socialism would be much richer in resources and opportunities for sharing than would be possible in small autonomous communities. The challenge is to ensure that global integration meets human needs.  People would prefer a compassionate world of giving and helping one another out, an all-for-one-and-one-for-all world for the benefit of all. Together, we can free ourselves from the heartless hell of capitalist rule.

A native American elder was teaching his grandson about life:

“A fight is going on inside me,” he said to the boy. “It is a terrible fight and it is between two wolves. One is evil – he is anger, envy, sorrow, regret, greed, arrogance, self-pity, guilt, resentment, inferiority, lies, false pride, superiority, and ego. The other is good – he is joy, peace, love, hope, serenity, humility, kindness, benevolence, empathy, generosity, truth, compassion, and faith. This same fight is going on inside you – and inside every other person, too.”

The grandson thought about it for a minute and then asked his grandfather, “Which wolf will win grandfather?”

The old Cherokee simply replied, “The one you feed.”

Posted by ajohnstone at 9:53 pm