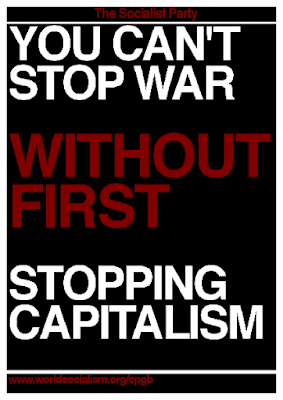 With the invasion of Ukraine by Russia, the whole world is discussing the question of war and peace. Europe stands on the verge of the abyss. The danger of a wider war is growing from day to day.

Total war, with its horrible outrages upon civilians, including children, as distinct from the armies engaged in combat, is not the hellish invention of a few individuals; it is the logical expression of present-day capitalism in military conflicts. ”War,” said Clausewitz, “is a continuation of politics by other means.” And politics, we would add, are a continuation of economic conflict by other means.

War is also an industry. The means of production are now mainly utilised to produce the means of destruction: the wage slaves  employed by their masters in producing and using the implements of war. Capitalism is run for profit. War is embarked on by the capitalist class because it is considered by one capitalist group or another that this course of action is the only course open to them in the circumstances in which they find themselves. They calculate they can retain or obtain what they desire only by war.

Whilst war is in the future is given much consideration by those who live on rent interest and profit; they try to discover ways and means of repaying themselves for the trouble and inconvenience the war has entailed. The plans of the profit band are formulated with the above objects in view. It is well to note that neither in war nor peace does the exploiting class produce; labour applied to the natural resources of the earth brings into being all exchange values; this being the case, the recipients of profit do not give to the cost of the war anything more than they have previously wrung from the working class.

Nationalism and patriotism groups people according to their land of origin, as decided by the vicissitudes of history; within every country, thanks to the patriotic link, rich and poor unite against the foreigner.

Socialism groups people, poor against rich, class against class, without taking into account the differences of race and language, and over and above the frontiers traced by history. Patriotism in every nation masks class antagonisms to the great profit of the leading class. Working people have no country. The differences which exist between the present countries are all superficial differences. The capitalist regime is the same in all countries. There is only one war which is worthy, that is class war, the social revolution.

To the poor, the propertyless mass of both sexes, falls the lot of loathsome toil in dangerous or unhealthy trades, long hours which make one disgusted with work. To them starvation wages; to them the insecurity of employment, the rigours of the law at the slightest fault, and if illness, old age, or unemployment comes, privations and dark misery with its procession of sorrows and shame. That’s what a country is – a monstrous social inequality, the shameful exploitation of a nation by a privileged class. There is nothing natural nor logical, than that in every country the poverty-stricken, disinherited, the overworked beasts of burden, ill-fed, badly housed, badly clothed, badly educated, march at the first call of the bugle to war.  Is it not possible for humanity to find a different plan for living, one that would give us security and peace? Then may it be that socialism will take its rightful place in the consciousness of the workers.

The only way in which humanity can bring about social change and build a fraternal society, free of war, is to establish socialism. This will not come about as an expression of non-violence but as the conscious act of a socialist working-class. The attitude of pacifism can be, and has been, adopted by people of all manner of opinions—for example, by members of the British Labour Party, by Christians and so on—all of whom support the capitalist social system which produces violence and which therefore makes pacifism an empty dream. Any organisation which accepts the continuance of capitalism, the cause of war in the modem world, is standing in the way of political parties like the Socialist Party, which seek to end capitalism and with it war.