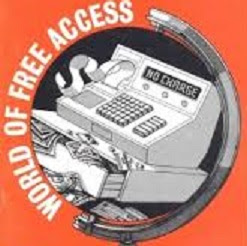 ‘Nothing in this society escapes the imprint of money. It follows from this that wanting to abolish money is to be obliged to think differently about absolutely everything, our very notions of time and space included.’ (p.16)

‘A society of free access would give freedom of choice to all those who currently find themselves in intolerable situations…. In the current system of society moving house to escape from a violent partner, for example, is a real battle if the person cannot show they have gainful employment and does not have money for a deposit on new accommodation. Such victims, without the capitalist ‘get-out’ of financial independence, find themselves trapped. The same thing applies to all the situations brought to the public gaze by the “Me too’ movement. Why would a woman give in to the unwelcome advances of a boss if she did not fear losing out in some way? What pressure could the predator exert if his prospective victim already had free access to everything he might have to offer?’ (p.23)

‘In a society of free access, all human activities will be chosen by the person doing them and will not bring with them any particular advantages, material benefits, or payment of any kind. Questions around equal reward or prestige will simply not apply. It’s the end of the road for the little Hitler, the office dictator, the ‘prestigious’ role, higher or lower pay.’ (p.23)

‘All our technological choices, past and present, are distorted by the buying and selling system and the absolute necessity in all its workings to turn a financial profit.’ (p.34)

‘Let’s imagine that there’s no longer any ownership of the means of production, no more patents, no more “intellectual property”, that every innovation is immediately commonly owned, that there are no longer any brand names to be defended against others, no more fancy advertising.  If we take what’s best in every make of washing machine, car or computer, would we not be able to make all manufactured objects wholly practical, indestructible and resource-light and at a environmentally minimal cost, and to manufacture only the number we need as we need them? How much less destruction and waste if we can finally make money obsolete!’ (p.36)

‘[In a moneyless society] some of the situations that cause violence would still certainly exist: envy, jealousy or frustration can lead to violence, but far less so than the acquisitive pressure current society exerts. An easy test is to look at official statistics and the reasons for incarceration. A quick calculation shows that at least two thirds of crimes are directly attributable to the money system.’ (p.40)

‘Free access is not an exchange economy and is regulated only by the availability of stock, by the ongoing supply of goods, and also by their impact on the environment, all things which concern equally all members of society’’ (p.55)

‘A society of free access by its very nature is a society without commercial imperatives or economic competition. And even the most able will be aware that they need the cooperation of the less able. If conflicts of interests do arise, new methods will emerge to resolve them, with conciliation rather than confrontation the order of the day.’ (p.63)

‘Campaigners who seek alternative methods of organising capitalism believing that they are being more  realistic may well get a shock one day when they realise that all they have done has been to prolong the agony of buying and selling society and hold back the consciousness of so many people.’ (64)

‘The problem is not solved if we aim at the wrong target, at the wrong enemy, if, in thinking we are fighting against capitalism, all we are doing in fact is alleviating some of its worst effects. The point is not to somehow manage capital better but to abolish it, and at the same time the exchange mechanism which is fundamental to it.’ (p.65)

‘Wanting to create an egalitarian, ecologically sound, peaceful society without free access is like wanting to build a car without inventing the wheel.’ (p.66)

‘The only true realists, the only true pragmatists, are those who want to abolish once and for all money, the  state, the market, commodities, the wage and salary system, exchange value and above all the need to turn a financial profit.’ (p.69)

‘[Free access society] will have no state with governments having overwhelming power for the length of their mandate but, instead, representatives elected for specific purposes and readily recallable by the majority. We are often told that such a system would be certain to be long-winded, confrontational and slow …..But a slowly taken decision involving consequences for millions should be a guarantee of quality. And the fact that there will no longer be “professional” politicians but rather delegates elected or appointed for a specific purpose and with a particular mandate will guard against power being taken by individuals or parties.’ (p.82)

‘In present society, absolutely anything can be bought and sold, whether it’s time, knowledge, virginity, or even human organs.’ (p.107)

‘We are not talking about returning to a “pre-monetary” world but about using our current knowledge to build a “post-monetary” world, transcending the primitive system of exchange, and getting to a world of comfortable abundance and free access.’ (p.129)

‘A society with commercial goals needs citizens to constantly consume, to fall into the traps laid by manipulative advertising; it needs citizens who are frustrated in their everyday lives and who can be made to believe that happiness comes from purchasing the latest product or service.’ (p.142)

‘Is some form of universal basic income a solution to the problems of the capitalist system? Definitely not.’ (p.170)

‘Real direct democracy does not consist in giving power to those who speak the most eloquently or the loudest. Nor does it open the door to armed or deranged groups of people. The only political arrangement  possible for a post-monetary system is to give to each person equal responsibility and equal access to knowledge and training as well as to decision-making.’ (p.187)

‘An efficient society is one that knows its limits, one that, instead of constantly seeking economic growth, focuses on satisfying everyone’s needs. Once these needs are satisfied, ‘economic growth’ for the sake of it serves no purpose. Once a washing machine is made truly to last, with the means to repair it available if it does break down available, there is no point in continuing to make more of them. Energies need to go into something else. Production responds to need. That is true efficiency.’ (p.191)

‘[Even in capitalism, people know that] a truly good occupation is not one that gives you the most material gain, but one that is socially useful. ’ (p.194)

‘Think of all the occupations directly or indirectly tied to the use of money: banks, insurance, accountancy, taxation, financial administration, commercial law ….. All these occupations will disappear immediately in a post-monetary system.’ (p.205)

‘A society of free access is founded on real direct democracy with each citizen needing to be conscious of this in order to make “reciprocity” function. It follows that any kind of armed or authoritarian revolution is completely incompatible with this vision. Armed or violent revolutions need sheep to send to the slaughter and obedience to leaders. The development towards a free access society needs human beings with clarity of consciousness.’ (p.216)

‘A free access society is not impossible. What is impossible is for us to continue to survive in a world which is poisonous and being poisoned and will continue to be so. What is impossible is to live in harmony in a world where the aim is to compete with our neighbours near and far just to have the means to live decently, a world where supplying armaments is a highly printable pursuit. When a society is harmful, the rules of operation must be changed.’ (p.274)

‘When in the society we are aiming for we will have finished repairing the mistakes of the past, then we will no doubt turn towards what we still do not have and we will go further. But we will do this in respecting the environment and the planet’s living beings and without forgetting that we do have limits but that respecting those is no real problem.’ (p.283).

The Thing,Engel,managed to get done, has only been writen never proper, socialist understood or cared to care grasp, and cherish, the thing.