The Institute for Policy Studies shows that the U.S. federal minimum wage would currently be just over $44 an hour—more than six times higher than the current wage floor—if it had increased at the same rate as Wall Street employee bonuses between 1985 and 2020.

During that 35-year period, the federal wage floor remained largely stagnant while the average Wall Street bonus soared by 1,217%.

The $7.25-an-hour federal minimum wage has not been raised since 2009, leaving minimum wage workers worse off today than they were more than a decade ago due to rising costs of living.

"While low-wage workers are still waiting for a raise in the minimum wage, Wall Street employees enjoyed a 10% bump in their bonuses in the first year of the pandemic," noted Sarah Anderson, director of the Global Economy Project at IPS and the author of the new analysis. "Since 1985, the average Wall Street bonus has increased from $13,970 to $184,000 in 2020." Anderson added. "These bonuses come on top of salary and other forms of compensation. The average salary (with bonuses) for all securities industry employees in New York City was $406,700 in 2019. At the very top end, CEOs of the top five U.S. investment banks hauled in an average of $27.9 million in total compensation in 2019."

Congress has left the federal minimum wage at a starvation level, Anderson pointed out, federal regulators have refused to implement Wall Street pay restrictions mandated by the 2010 Dodd-Frank law, allowing financiers to accumulate large bonuses as low-wage workers struggled to get by on stagnant pay. "These two failures speak volumes about who has influence in Washington—and who does not," Anderson wrote.

Minimum Wage Would Be $44 Today If It Had Increased at Same Rate as Wall St. Bonuses: Analysis | Common Dreams News 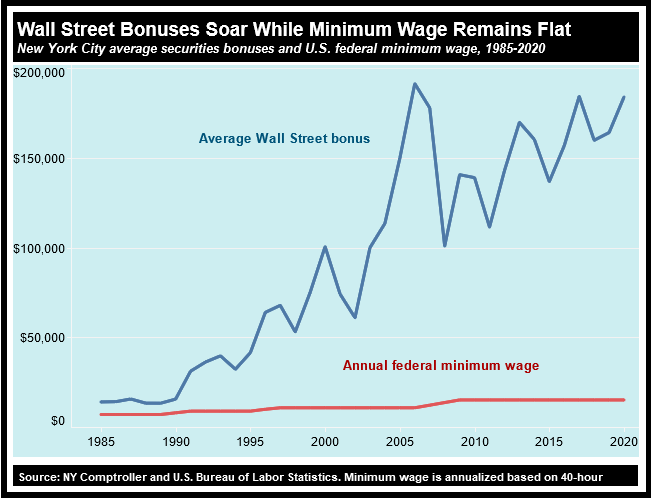 Posted by ajohnstone at 2:21 am