Learn to think in school 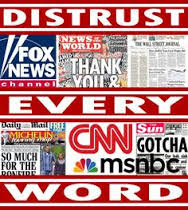 Finland was recently rated Europe’s most resistant nation to fake news and it is where critical thinking has become a core, cross-subject component of the school national curriculum. The curriculum was devised by the Finnish government after 2014, when the country was first targeted with fake news stories by its Russian neighbour, and the government realised it had moved into the post-fact age.

Students learn how easy it is to lie with statistics. In art, they see how an image’s meaning can be manipulated. In history, they analyse notable propaganda campaigns, while Finnish language teachers show the many ways in which words can be used to confuse, mislead and deceive.

Kari Kivinen, head teacher, points out you can start when children are very young, “Fairytales work well. Take the wily fox who always cheats the other animals with his sly words. That’s not a bad metaphor for a certain kind of politician, is it?”

He wants his pupils to ask questions such as: who produced this information, and why? Where was it published? What does it really say? Who is it aimed at? What is it based on? Is there evidence for it, or is this just someone’s opinion? Is it verifiable elsewhere?

“The goal is active, responsible citizens and voters,” Kivinen said. “Thinking critically, fact-checking, interpreting and evaluating all the information you receive, wherever it appears, is crucial. We’ve made it a core part of what we teach, across all subjects.”

Fake news, Kivinen said, is not a great term, especially for children. Far more useful are three distinct categories: misinformation, or “mistakes”; disinformation, or “lies” and “hoaxes”, which are false and spread deliberately to deceive; and mal-information, or “gossip”, which may perhaps be correct but is intended to harm.

“Even quite young children can grasp this,” he said. “They love being detectives. If you also get them questioning real-life journalists and politicians about what matters to them, run mock debates and real school elections, ask them to write accurate and fake reports on them…democracy, and the threats to it, start to mean something.”

Priya, 16, said education was “the best way to fight it. The problem is, anyone can publish anything. There’s not much a government can do when they’re faced with big multinationals like Google or Facebook, and if it does too much it’s censorship. So yes, education is what’s most effective.”