100th Anniversary of the Kronstadt Commune 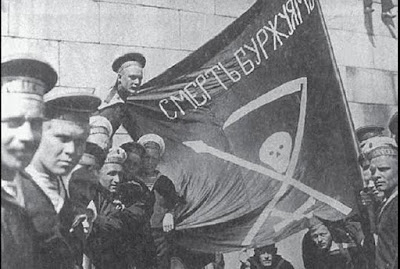 Among the anarchist and anti-Bolshevik left, 1921 is remembered for two events. The New Economic Policy (NEP) where Lenin acknowledged the primacy of the capitalist system within Russia. And the mutiny at the Kronstadt naval base. It was an event where many in the socialist movement concluded that there was nothing to choose between Russian state capitalism and Western private capitalism

In February 1921 strikes broke out in Petrograd after the government had announced that the very meagre bread ration was to be cut by a third. At the Kronstadt naval base, the sailors rebelled in support of the factory strikers, deposed the Bolshevik officials, and in the planks of their platform they demanded such elementary rights as freedom of speech for workers; right of assembly; liberation of political prisoners; new free and secret elections to the soviets. In effect they sought the fulfilment of the promise of a  ‘soviet government’ rather than the one-party rule of the Bolsheviks. The leading Bolsheviks, vehemently denounced the revolt. Lenin’s government responded by sending in the Red Army to suppress this challenge to their rule. Those sailors who were not killed or captured, fled to Finland. It was partially the Commune’s economic demands which were met without being acknowledged as such by the NEP.

The revolutionary sailors of Kronstadt had the prestige of being considered heroes who contributed to the 1917 Bolshevik victory, but had come to realise that they had been duped; that there was no semblance of liberty or democracy in the regime they had helped to create. In due course this led 1921’s act of defiance against the new tyranny. The autocratic nature of Bolshevism cannot be blamed upon Stalin. The apparatus of oppression was already built into this “workers’” state as the Kronstadt massacre happened under Lenin and his second-in-command, Trotsky.

The litany of anti-working class measures implemented by the Bolsheviks  is long : the crushing of the factory committees, the subordination of the trade unions to the state, the imposition of top-down ‘one-man’ management in the factories, the introduction of the notorious ‘militarisation of labour’ programme under Trotsky and the systematic elimination of all political opponents both inside and outside the Party, culminating in the ruthless suppression of the Kronstadt rebellion on fabricated charges that it was a White Army plot. It should be noted that the now often lauded Workers Opposition were fully complicit in the deceit and supportive of the crushing of the Kronstadt Commune. Clearly the Bolshevik regime was no dictatorship of the proletariat but a dictatorship over the proletariat.

No matter what sympathies we have with the Kronstadt we evaluate situations from a Marxist point of view. Even if they had been victorious, it was not going to bring socialism. The Kronstadters had no economic agenda other than various reforms favouring the ability of the peasantry to engage in trade. But they may have succeeded in achieving improved democracy and public accountability and avoided an era of state terror, show trials and gulags.

"it was not going to bring socialism": then the question becomes "what would?" if the answer is, using the marxist theory of historical stages, that a developed capitalist economy is a precondition of socialism, then kronstadt and the gulags become infinitely defendable.

The Kronstadt shouldn't be looked at in isolation - it wasn't a one-off but the culmination of many rebellions and revolts and the suppression of any independent soviets across Russia, the Ukraine, Georgia.

Choices were made by the Bolsheviks back in April 1917 not to become the "loyal" opposition to the Kerensky government (that is exactly how Trotsky later described himself to Stalin).

To retain their political power after the premature capture of the State in October 1917, repression of the Mensheviks (both wings), the SRs (both wings) and the anarchists was just as vital to the Bolsheviks as the defeat of the Whites was to them.

Lenin could have negotiated with the Kronstadt Commune using the reforms he later passed in the NEP to placate much of their demands but it would have undermined Bolshevik rule if free elections to the soviets were permitted, after the Bolsheviks had just emasculated all their authority. There could be no third revolution allowed.

In a scenario where the Kronstadt, the Leningrad strikers, the Workers Opposition and the other smaller dissident Bolshevik groups, the Makhnovists, and various peasant uprisings had prevailed and some nationalist movements, a capitalism of small enterprises would have developed and went through that stageist analysis stage you seem so dismissive of...the eventual accumulation and concentration and centralisation of capital. That also meant the inevitable enclosures and the dispossession of the peasants and the only question would be is if it would have been bloodier or less bloody than what actually materialised.