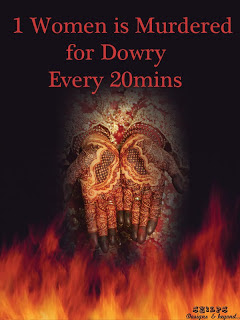 With so much resistance from women against the violence inflicted upon them now featuring in the media, there are other forms of repression and oppression which equally leads to the subjugation of females. In India, it is the ubiquitous  dowry system and arranged marriages that reveals that daughters are traded as a commodity.

This article condemns the practice as the "curse" of India.

India has an alarming rate of crime over dowry; either murdered, or compelled to commit suicide. The pernicious system of dowry and the unconscionable demands made by greedy and unscrupulous husbands and their relatives, results in an alarming number of suicidal and dowry deaths of women.

Each passing year cases are rising higher, in the year 2001 was 19 per day, in 2016 was 21 per day according to the National Crime Bureau of India.

In the patriarchy which is India, women have been relegated to mere procreation and attending the household chores. The patriarchal culture dilutes freedom and equality of women in all walks of life. Dowry continues to be a basic component of the marriage system although its form, magnitude and the associated atrocities on the women vary according to the customary norms of the different communities.

Dowry in India is not limited to any specific religion. Dowry primarily associated with marriages in Hindu society has penetrated into other societies such as Muslims, Christians and to some extent also in Sikh community. Religions consolidate the male domination where woman are subject to her husband and her in-laws. Dowries and elaborate wedding ceremonies bring financial debts that can rarely be paid off.

Dowry is basically a cultural and social problem which cannot be eradicated by law alone. India has already legislation in attempts to counter the custom. The Dowry Prohibition Act, 1961 was passed in 1961 to prohibit the practice of giving or receiving dowry. It was amended in 1984 and 1986 respectively to curb the evil practice of dowry. To further strengthen the anti-dowry law and to stop offences of cruelty by the husband or his relatives against the wife, new provisions were added to the Indian criminal law- section 498A to Indian Penal Code and section 198A to the Criminal Procedure Code in 1983. In 2005, the Protection of Women from Domestic Violence Act was passed, which added an additional layer of protection from dowry harassment. In 2019, Government of India passed legislation for the Muslim Women “Protection of Rights on Marriage Act”. This act declared Triple Talaq illegal and onward any Muslim husband pronounces triple talaq to his wife liable to 3 years imprisonment and fine.

Those laws have not put an end to dowry.