CEO fat cats get the cream 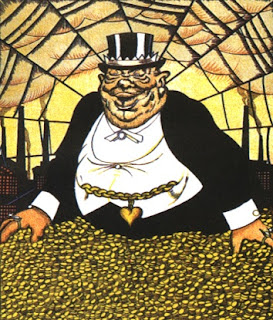 In 1980, big company CEOs averaged 42 times more compensation than their typical workers. These gaps rapidly expanded in the 1990s, as wages stagnated for most workers and stock-based executive pay exploded. During the 21st century, the annual gap between CEO pay and typical worker pay has averaged about 350 to 1.

In the three years leading up to the 2008-09 meltdown, the top five executives at the 20 biggest bailed out banks had averaged $32 million each in personal compensation.

Coca-Cola: None of the soft drink maker's top executives met their bonus targets last year, but the board gave them all bonuses anyway. CEO James Quincey wound up with a total compensation package worth more than $18 million, over 1,600 times as much as the company's typical worker pay.

Carnival: The pandemic has been devastating for the cruise industry. At Carnival, CEO Arnold Donald not surprisingly failed to meet his pre-Covid bonus targets. He also accepted a cut in his base salary from $1.5 million in 2019 to $857,413 in 2020. But thanks to a special "retention and incentive" award, Donald's total 2020 compensation grew to $13.3 million — nearly $2.2 million more than in 2019. He received the bulk of his special stock awards on August 28, 2020.

After the industry shut down in mid-March amid Covid-19 outbreaks on several ships, Carnival and other cruise lines focused on getting paying customers home while leaving employees stranded on board for months without pay. The company reportedly even charged the abandoned workers for basic necessities like soap.

Tyson Foods: The meat processing company's top executives didn't meet their cash bonus targets either. So what did the board do? The Tyson directors gave them stock awards to make up the difference. Frontline employees, meanwhile, were facing high risks on the job. More than 12,000 of the company's workers have contracted Covid-19, and at least 38 have lost their lives to the virus—more than at any other meatpacking company. One of the executives who benefited from the Tyson board's special Covid stock awards is company chair John Tyson, who was hardly in dire need of support. The heir and grandson of the company founder, Tyson has watched his personal wealth increase 62 percent during the pandemic—to $2.4 billion.

According to research by the Institute for Policy Studies colleagues and Americans for Tax Fairness, the nation's 657 billionaires have enjoyed a stock-fueled boost in their net wealth of 44 percent since the rough start of the pandemic crisis.

More than 500 publicly held U.S. companies announced cuts to their CEO's base salary in 2020. These moves garnered considerable positive press coverage, but they had a negligible impact on pay levels since straight salary makes up on average only 10 percent of executive compensation packages. A.O. Smith CEO Kevin J. Wheeler, for example, took a 25 percent salary cut while enjoying a 36 percent increase in his overall compensation. At Whirlpool, CEO Mark Bitzer accepted a 25 percent trim on his base salary during April and May 2020 while his total compensation for the year rose 22 percent to more than $17 million.

A report for the Institute for Policy Studies found that 80 percent of S&P 500 firms paid their CEO over 100 times more than their median worker in 2018.

Opinion | The Single Most Dramatic Driver of Our Country's Economic Divide: The Growing Gap Between CEO and Worker Pay (commondreams.org)