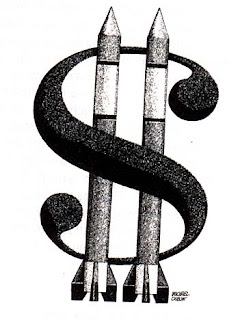 The US Air Force plans to order more than 600 new nuclear missile the length of a bowling lane. It will be able to travel some 6,000 miles, carrying a warhead more than 20 times more powerful than the atomic bomb dropped on Hiroshima. The missile currently goes by the inglorious acronym GBSD, for “ground-based strategic deterrent.”

On September 8, the Air Force gave the defense company Northrop Grumman an initial contract of $13.3 billion to begin engineering and manufacturing the missile, but that will be just a fraction of the total bill. The government will spend roughly $100 billion to build the weapon, which will be ready to use around 2029.  $100 billion could pay 1.24 million elementary school teacher salaries for a year, provide 2.84 million four-year university scholarships, or cover 3.3 million hospital stays for covid-19 patients.

The GBSD is designed to replace the existing fleet of Minuteman III missiles; both are intercontinental ballistic missiles, or ICBMs. Like its predecessors, the GBSD fleet will be lodged in underground silos, widely scattered in three groups known as “wings” across five states.

America’s nuclear arsenal is presently 3,800 warheads. ⁠ Russia has about 4,300 nuclear warheads, the only arsenal on par with America’s, and is also up-grading to new nukes.

William J. Perry, Secretary of Defense during the Clinton administration, argued in 2016 that “we simply do not need to rebuild all of the weapons we had during the Cold War” and singled out the GBSD as unnecessary.

And for practical purposes, such numbers are superfluous and surplus to requirements. “Once you've dropped a couple of nuclear bombs on a city, if you drop a couple more, all you do is make the rubble shake,” said Air Force Maj. Gen. (Ret.) Robert Latiff, a Bulletin Science and Security Board member who once commanded a unit of short-range nuclear weapons in West Germany.

James Mattis, the former Marine Corps general who would go on to become Secretary of Defense, testified to the Senate Armed Services Committee in 2015 that getting rid of America’s land-based nuclear missiles “would reduce the false alarm danger.” Whereas a bomber can be turned around even on approach to its target, a nuclear missile launched by mistake can’t be recalled.

Why is America getting a new $100 billion nuclear weapon? - Bulletin of the Atomic Scientists (thebulletin.org)

Posted by ajohnstone at 4:36 am