Peter Maybarduk, director of Public Citizen’s access to medicine program said right now , “it’s not even clear the goal is to vaccinate the world”.

The disparity has been called “vaccine apartheid”.

Many have  called for the world’s largest pharmaceutical companies to share technical know-how in an effort to speed the global vaccination project beyond existing vaccine supply. Many see a bigger fight in patent laws, and are drawing on experience advocating for greater access to antiretroviral drugs for HIV.

“There’s no question poorer countries are having a hard time affording doses,” said Dr Howard Markel, a pandemic historian at the University of Michigan School of Public Health. “Even if they were at wholesale or cost there are a lot of different markups.”

“This is a classic case where you have an industry that has a very direct stake in protecting itself, and there’s very little understanding among the public how much is at issue,” said Dean Baker, an economist and co-founder of the Center for Economic and Policy Research. Activists argue pharmaceutical companies should share production know-how, and be appropriately compensated. One part of this fight centers on a provision of international trade law called the Trips agreement, or more formally, the agreement on trade-related aspects of intellectual property rights. Put in force in 1995, Trips requires all member states to recognize 20-year monopoly patents for pharmaceuticals, including vaccines.

“What Trips was about was imposing US-European style copyright on the whole world,” said Baker. “Most developing countries had very little idea what they were dealing with.”

Annual or booster Covid-19 shots appear increasingly likely – in part driven by the possibility variants could emerge in populations without vaccine access – and as pharmaceutical companies eye future profits.

Coronavirus: how wealthy nations are creating a ‘vaccine apartheid’ | Coronavirus | The Guardian 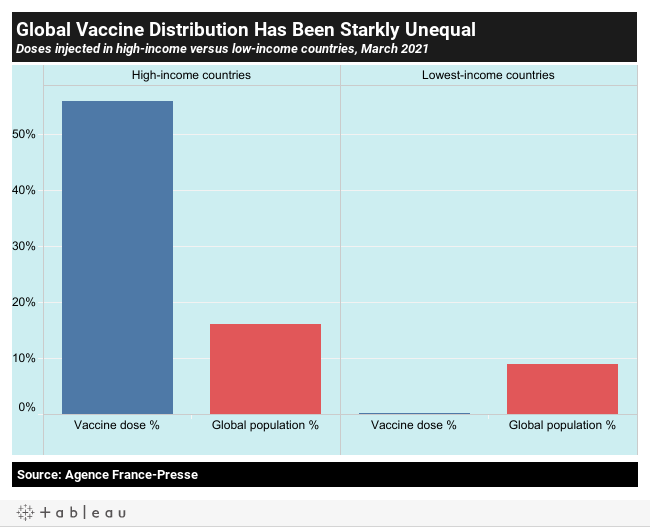 Posted by ajohnstone at 7:35 pm