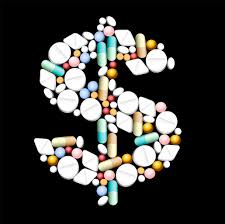 Sovaldi and the related pill Harvoni cost Medicare and Medicaid more than $5 billion in 2014.

After an 18-month investigation into the high cost of Gilead's hepatitis C drug Sovaldi—initially listed at $84,000 for a course of treatment or $1,000 per pill—the Senate Finance Committee said the prices did not reflect the cost of research and development and that Gilead cared about "revenue" not "affordability and accessibility."

In 2008, the Texas attorney general's office charged Risperdal maker Janssen (Johnson & Johnson's psychiatric drug unit) with defrauding the state of millions "with [its] sophisticated and fraudulent marketing scheme," to "secure a spot for the drug, Risperdal, on the state's Medicaid preferred drug list and on controversial medical protocols that determine which drugs are given to adults and children in state custody." The Texas attorney general's office charged Janssen with bribing Texas' mental health officials with trips, perks and kickbacks. Janssen also paid drug company-funded front groups, disguised to look like patients, to "give state mental health officials and lawmakers the perception that the drug had widespread support," reported Bloomberg. Many alleged patient groups agitating for approval of expensive new drugs or fighting so-called "barriers" to treatment and mental illness "stigma" are actually slick drug company marketing creations. Many are entrenched in schools and on college campuses to capture "psychiatric patients" at an early age, often ensuring decades of sales. In Texas, a Medicaid "decision tree" called the Texas Medical Algorithm Project was instituted that mandates doctors prescribe the newest and most expensive psychiatric drugs first. The program was funded, not surprisingly, by the Johnson & Johnson-linked Robert Wood Johnson Foundation.

The Department of Veterans Affairs spent $717 million on 5 million prescriptions of Risperdal to treat post-traumatic stress disorder in troops deployed to Afghanistan and Iraq only to discover after nine years that the drug worked no better than a placebo, reported the Journal of the American Medical Association (JAMA) in 2011.

According to New York Times columnist Nicholas Kristof, the drug industry spent $272,000 in campaign donations per member of Congress last year. He reports that there are more drug company lobbyists than members of Congress.

Of course, Big Pharma aren't the only corporations that is ripping the people off big time. It is simply that Big Pharma is just more disgusting because it directly impacts a person’s health, in addition to their wallet. They are creating a nation of prescription drug addicts by making normal human behaviors a disease or a syndrome. Big Ag is another behemoth entity gambling with people’s health to make a profit.

From here
Posted by ajohnstone at 8:00 pm