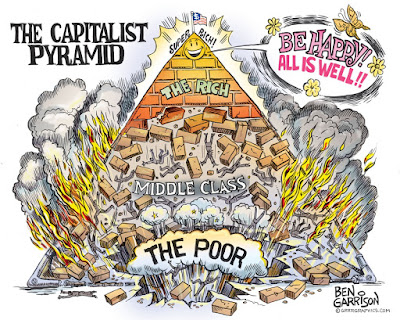 Capitalism has failed us.  We're overworked, underemployed and more powerless than ever before. Economists Emanuel Saez and Gabriel Zucman found in 2014 that the concentration of wealth held by the top 0.1 percent has reached levels not seen since the 1920s. 16,000 Americans hold as much wealth as 80 percent of the nation’s population – some 256,000,000 people – and as much as 75 percent of the entire world’s population. The combined wealth of these 16,000 people is more than $9 trillion. A few billionaires are even wealthier. In the United States, 536 people had a shared net worth of $2.6 trillion at the end of 2015. Fortune 500 CEOs earned about 42 times as much on average as the typical worker in 1980. Today they earn 373 times as much. In fact, seven of this country’s 30 largest corporations paid their CEOs more than they paid in taxes.

American full-time salaried workers supposedly laboring 40 hours a week actually average 49, with almost 20% clocking more than 60. Today, only 11% of American workers belong to a union. Labor union membership has plummeted from a third of all private-sector workers in the 1950s to fewer than 7 percent today.

The median household income in the United States fell by more than 7 percent between 1999 and 2014. It’s now slightly over $53,000. According to the Census Bureau, median income has dropped by 6.5 percent since 2007. But rents keep going up. As a result, the number of families spending more than half their incomes on rent—the 'severely' cost-burdened renters—has surged from 7.5 million to 11.4 million in the last decade, a stunning 50 percent increase. Billionaire Steve Schwarzman finds the growing anger among voters "astonishing." But his company, Blackstone, is a corporate model for making money at the expense of desperate former homeowners. Since the recession, it has become the nation's leading landlord, buying up tens of thousands of homes at rock-bottom prices, and then renting them back, often to the very people who lost them.

Americans pay more for pharmaceuticals than the citizens of any other advanced nation, for example. We also pay more for Internet service. And far more for health care. With the average cost of a year's worth of life-preserving drugs over $50,000, 43 percent of sick Americans skipped doctor's visits and/or medication purchases in 2011-12 because of excessive costs. It keeps getting worse. About half of households age 55 and older have no 401(k) or IRA or other retirement savings.  Trade treaties protect the assets and intellectual property of big corporations but not the jobs and wages of workers. Over one generation, from 1984 to 2009, the net worth of an American under 35 dropped from $11,521 to $3,662, a 68 percent decline, in good part because of debt. In approximately the same time, the percentage of stay-at-home young adults rose from 11 percent to almost 24 percent. Apple makes a $400,000 profit per employee while paying its retail specialists less than $30,000 per year.

From the end of World War II through 1968, the wages for workers in the middle, and even the minimum wage, tracked productivity closely. Then something changed. Between 1979 and 2012, after accounting for inflation, the productivity of the average American worker increased about 85 percent. Over the same period, the inflation-adjusted wage of the median worker rose only about 6 percent, and the value of the minimum wage fell 21 percent. As a country, we got richer, but workers in the middle saw little of the gains, and workers at the bottom actually fell behind. If the national minimum wage had kept pace with productivity it would have been $22 per hour by 2013. Instead it’s $7.25 today. A slightly more conservative says the minimum wage would have been $18.42 per hour in 2015. On the other end of the spectrum most of the nation’s income gains are now going to the top. Income gains for the top 1 percent now dwarf those of other households. In 2011 the Congressional Budget Office (CBO) found that “between 1979 and 2007, income grew by: 275 percent for the top 1 percent of households; 65 percent for the next 19 percent; just under 40 percent for the next 60 percent; and 18 percent for the bottom 20 percent.” And most of the gains since the 2008 economic crisis have gone to the wealthiest among us. The middle-income cost of living has risen significantly. Even after wages are adjusted for inflation, middle-income has failed keep up with increases in such costs as child care, higher education, health services, retirement, and housing – expenses that disproportionately affect middle-income households.

U.S. oligarchs maximize their wealth and keep it, using the “democratically elected” government to shape policies and laws favorable to the interests of their class. They insist that all of us have the “freedom” to create a business in the “free” marketplace, which implies that being hard-up and poor is our own fault. Wealth and income are more concentrated at the top than in over a century. And that wealth has translated into political power. The economic system is rigged in favor of those at the top. Giant companies have accumulated vast market power. Wall Street banks have more of the nation’s banking assets than they did in 2008, when they were judged too big to fail. Hedge-fund partners get tax loopholes, oil companies get tax subsidies, and big agriculture gets paid off. Low wages increases the profits of Walmart and their ilk, but requires its employees and their families to apply for food stamps and Medicaid in order to avoid poverty – an indirect government subsidy of Walmart. Overall, more than 48 million Americans live in poverty. The U.S. poverty rate for children is over 20 percent, higher than that of all other major developed countries.

Over a third of American troops returning from Iraq and Afghanistan have been diagnosed with some sort of mental disorder. Yet from 1970 to 2002, the per capita number of public mental health hospital beds plummeted from 207 per 100,000 to 21 per 100,000 -- nearly a 90 percent cut! After the recession state funding was cut some more.

In 1971 Congress passed the bipartisan Comprehensive Child Development Bill to establish a multi-billion dollar national day care system for the children of working parents. In 1972, President Richard Nixon vetoed it. In 1972, Congress also passed a bill (first proposed in 1923) to amend the Constitution to grant equal rights of citizenship to women.  Ratified by only 35 states, three short of the required 38, that Equal Rights Amendment, or ERA, was declared dead in 1982, leaving American women in legal limbo.

In 1996, President Bill Clinton signed the Personal Responsibility and Work Opportunity Reconciliation Act, obliterating six decades of federal social welfare policy “as we know it,” ending federal cash payments to the nation’s poor, and consigning millions of female heads of household and their children to poverty.

The average African American family had readily available liquid wealth of only $200 in 2011, less than $1 for every $100 owned by whites. A middle-aged black person with a graduate degree has about the same odds of being a millionaire as a white person with only a high school diploma.

The wealthy are afraid of radical change, the kind that might bring about a popular uprising against Big Business greed. It's too late for gradual change. Real change never comes from the top on down. It comes from the bottom on up. No change unless millions of people become engaged in the political process in a way that we have not yet seen. Re-designing our social and economic system is a massive undertaking and expecting one person or one party to do it is lunacy. Some pessimists say we shouldn’t even try to change the order of things and simply accept the status quo. They think it is foolish to aim for fundamental change and call socialism an impractical pie-in-the-sky goal. This is defeatism. Too many rather not rock the boat. But here’s the problem. There’s no way to reform the system without rocking the boat. There’s no way to get to where we should be without aiming high. Any other political strategy is defeatism. Change will never happened without people championing bold new ideas.

Socialism can be achieved if the people are mobilized for it with determined enthusiasm. There are more people who care than who don't care, it's a matter of working with those that are psychologically afraid of change and showing them why it is necessary. We will start challenging as true proponents for change, and we will start winning. If we don’t try there is no chance of hope. To say otherwise is to encourage a false cynicism that breeds permanent despair. This system is not sustainable. We must end capitalism and make economic democracy work for the many, not just the few. We must try. We have no choice. Which side are you on?
Posted by ajohnstone at 7:00 pm