Buying off the politician 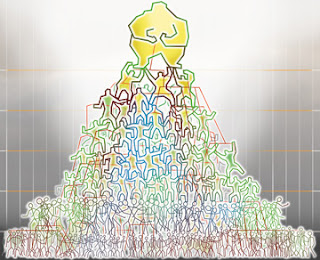 In the United States, children go hungry. The American people are suffering. Yet this is not a poor country. The top 0.1 percent of Americans are sitting on as much wealth as the bottom 90 percent combined. Long have the powerful few profited from the poor majority. Exploitation is a highly profitable business. Corporate profits are at an 85-year high, while workers' pay is at a 65-year low.

US legislators and corporate executives are tied together. A handful of individuals and their corporations openly spend millions in political campaign contributions (and millions more anonymously in dark money), as well as $2.6 billion every year to lobby Congress (more than the Senate and House budget combined). Corporate executives profit from this investment in corporate welfare (subsidies, grants, incentives, tax breaks and tax loopholes), the preservation of the destructive status quo, and beneficial (or the lack of detrimental) legislation that their lobbyists actually help to write. Corporations have an inordinate amount of control over what legislation gets passed, and since, as one survey shows, big business is only concerned with protecting "the company against changes in government policy," and improving their "ability to compete by seeking favorable changes in government policy," the laws that CEOs want are often terrible for the rest of the country. Corporations are concerned with their bottom line, not people, and so are the bills for which they lobby for.

The Harvard University Center for Ethics reports, "Institutional corruption is, sadly, alive and well in Congress." This is starkly evident in the new 2016 spending bill that gives $400 billion in tax favors to big business.

Walmart is the largest employer in the United States, with 2.2 million individuals on its payroll, yet the company only pays a (brand-new) minimum wage of $10 per hour. If you work 40 hours every week of the year (12 months of nonstop full-time work) that wage adds up to a paltry $20,800, a salary below the poverty line for a family of three. You cannot earn a living off this. In 2014 alone, Walmart gave $2,366,629 in political campaign contributions, and spent $7 million on lobbying. Twenty-seven members of Congress hold investments in the company, and 84 out of 103 (81 percent) of Walmart lobbyists have previously held government jobs. The company is also freely evading $19 billion in taxes, and receiving $23 million a year (or $1 billion throughout its 42-year history) in government tax breaks, free land, infrastructure assistance, low-cost financing and outright grants - a figure Good Jobs First notes might "very well be the tip of the iceberg." Walmart pays its workers abysmally, abuses its employees and hurts small “mom and pop” and the family farmer businesses - but it has close ties with Congress, and that makes all the difference.

Since 1989, the GEO Group and Corrections Corporation of America (CCA), the two largest for-profit prison companies in the United States, have given nearly $10 million in political donations and spent almost $25 million on lobbying. In 2013-14, 78 percent of GEO Group lobbyists and 63 percent of CCA lobbyists previously held government jobs. These private prison companies are for-profit in the cruelest sense of the phrase: They lobby for harsher sentencing on nonviolent crimes through three-strikes laws, mandatory sentencing and truth-in-sentencing laws (the abolishment or reduction of parole), and push for new anti-immigrant laws to put more immigrants behind bars. The effects of this lobbying, donating and revolving are clear. GEO Group and CCA receive millions in government subsidies each year. Congress now has a quota for how many human beings must be locked in a tiny room per day: at least 34,000 immigrants, a number that continues to grow each year, eventhough the number of undocumented immigrants in the United States has leveled off. If the beds are not filled, the government still must pay the corporation, to the further detriment of the taxpayer. In Arizona, 30 of the 36 state legislators who co-sponsored an (unsuccessful) immigration law to put even more people in detention received campaign donations from private prison corporations like GEO Group and CCA. When Republican presidential candidate Sen. Marco Rubio was speaker of the Florida House of Representatives, GEO Group got a $110 million government contract to build another private prison; GEO has donated almost $40,000 to Rubio's campaigns throughout his political career, the highest amount in career money the company has ever donated to any US senator. Such "parasitic relationships" have allowed the private prison industry to pull in $2 billion in yearly profits.

In 2013, Amgen received a $500 million financial gift from Congress when a handful of legislative aides slipped a provision into the final fiscal bill, allowing Amgen to evade Medicare cost-cutting controls for two more years. The change was supported by Senators Max Baucus (D-Montana), Orrin Hatch (R-Utah) and Mitch McConnell (R-Kentucky), all of whom have political and financial ties to Amgen, receiving $68,000, $59,000 and $73,000, from 2007 to 2013, respectively. Another pharmaceutical giant, Pfizer, spent $10,140,000 on lobbying in 2013, and gave $2,217,066 in political campaign contributions in 2014, while 40 members of Congress hold shares in the company, and 48 out of 84 Pfizer lobbyists in 2013-14 previously held government jobs. This company has been allowed to evade $69 billion in taxes. Americans are paying more for their prescription drugs than any other wealthy country on earth (helping to keep us sicker and dying younger than people of other wealthy nations) to the further profit of large pharmaceutical corporations. Unlike any other rich countries Congress does not regulate predatory pricing practices.

Wells Fargo is the fourth-most popular stock in Congress, and JPMorgan Chase is the ninth. General Electric, the company that paid zero taxes in 2010 and helped crash the economy in 2007, is the most popular stockholding in Congress, with $967,038 being the minimum Democratic investment and $1,392,475, the minimum Republican investment in 2014, the last year data is available. GE spent nearly $4 million in political campaign contributions during the 2014 election cycle, and over $15 million in political lobbying. The company has $110 billion stashed offshore, and is taxed at an effective rate of 4 percent - 31 points lower than what it actually owes the IRS. Wall Street CEOs are collecting millions while threatening to crash our economy yet again (JPMorgan Chase, Wells Fargo, Citigroup and Goldman Sachs are all on the Financial Stability Board's 2015 "too-big-to-fail" list). Meanwhile, Americans are still suffering from the last crash - and Congress, while receiving campaign donations from and investing in Wall Street, is doing nothing to curb their growth. Congress has yet to pass true Wall Street reform.

If the person benefiting from the status quo is trying to convince you that things should stay the same, take a close look at who is filling his or her pockets.