The Price of Pollution (2) 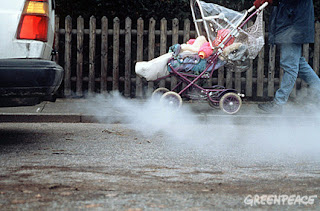 Invisible pollution kills up to 9,000 people a year in the UK capital. But under government plans, from school gates to shopping streets, Londoners will be breathing dangerous air until 2025. The greatest problem is with nitrogen dioxide (NO2), a pollutant that inflames the lungs, stunting their growth and increasing the risk of respiratory diseases such as asthma and lung cancer. Unlike smog of the past, NO2 is a hidden killer. London has an acute problem with NO2, possibly the worst in the world. Putney high street broke its annual emission limits just eight days into the new year, with Knightsbridge, Oxford Street, Earls Court and Brixton all following suit before the end of January. Across the country, the government estimates 23,500 people die prematurely from NO2 pollution. The life-shortening effects of air pollution are equivalent if not greater than the risks of inactivity and obesity and alcoholism. Richard Howard, at the think-tank Policy Exchange found a Londoner’s life expectancy is cut by about 16 months by air pollution with poorer neighbourhoods worst affected.

Prof Sir Malcolm Green, founder of British Lung Foundation and an eminent respiratory physician, is in no doubt about the scale of the issue. “London certainly has significant pollution, enough to have effects on health. It is a hidden killer.” In addition to NO2, particulate matter (PM) remains at double the WHO guideline levels. “It’s like inhaling little particles of tar,” says Prof Green. “They go right down into the lungs and can pass through the membrane into the bloodstream”, increasing the risks of strokes and heart attacks. Though levels in London are close to the higher EU limits for PM, no threshold has yet been established below which harmful effects end.

1,000 schools in London sit just 150 metres or less from roads on which at least 10,000 vehicles go past. Simon Birkett, director of the Clean Air in London campaign group, says: “Children are ultimately defenceless. They can’t vote but they are lumped with the health effects for life.” His research revealed that one-third of London’s schools are close to busy roads and suffer illegal levels of pollution

NO2 levels are 2.5 times higher inside the vehicle than outside. There’s a concentrating effect of being in a confined space. “The public health message is, you can’t hide from air pollution inside a car,” says Ben Barratt, an air quality expert at King’s College London. “We advise the public to leave the car at home whenever possible. This exposes you and your family to lower levels of air pollution, you’re not contributing to the problem, and you’re also getting the benefits of exercise. That’s tackling three of our biggest public health challenges in one go: air quality, climate change and obesity.” Birkett cites the great smog of London, which killed 4,000 people over the course of a few weeks in 1952. It led to the landmark Clean Air Act of 1956, which rapidly improved air quality, but recent decades have seen air pollution climb again with the rise of diesel vehicles. “We are back where we were in a sense,” he says. “There were 4,000 deaths from the great smog and we did something about it. Now it’s 4,000-9,000 deaths a year in London. We need to ban diesels as we banned coal 60 years ago. That is the only way we can comply with World Health Organization guidelines,” Birkett says. The Ultra Low Emission Zone coming into force in London in 2020 will charge – not ban – more polluting vehicles but it only covers 300,000 people in the capital, not the 3 million living in polluted inner London boroughs.
Posted by ajohnstone at 6:38 am