The Dealers in Death 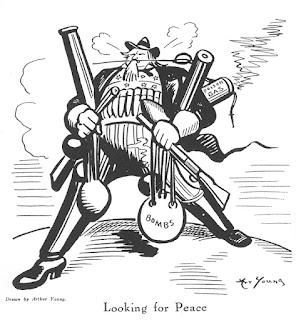 According to the Stockholm International Peace Research Institute (SIPRI), the volume of international transfers of major weapons, including sales and donations, was 14 percent higher in 2011-2015 than over the five previous years, with the US and Russia doing most of the exporting. The biggest importers were India, Saudi Arabia, China and the United Arab Emirates (UAE). India remains by far the biggest importer of major arms, accounting for 14 percent of the total; twice as much as second-placed Saudi Arabia and three times as much as China. The flows of weapons to Africa, Asia and Oceania and the Middle East all increased between 2006-10 and 2011-15.

The United States has sold or donated major arms to a diverse range of recipients across the globe. US arms went to more than 90 countries.

"As regional conflicts and tensions continue to mount, the USA remains the leading global arms supplier by a significant margin," said Aude Fleurant, director of the SIPRI Arms and Military Expenditure Program. "The USA has sold or donated major arms to at least 96 states in the past five years, and the US arms industry has large outstanding export orders," including for over 600 F-35 combat aircraft, said Fleurant. The biggest chunk of US major arms, 41 percent, went into Saudi Arabia and the rest of the Middle East.

Russia remains in second place on the SIPRI exporters list, with its share of the total up three points to 25 percent. India took the largest chunk of Russian weaponry.

China leapfrogged both France and Germany over the past five years to become the third-largest source of major arms globally, with an 88-percent rise in exports. Most of the Chinese weapons went to other Asian countries, with Pakistan the main recipient.
Posted by ajohnstone at 7:00 pm