A spectre is haunting Europe 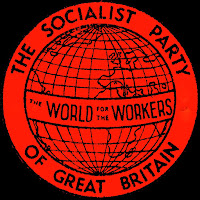 When people start talking about the importance of preserving national independence it's a clear sign of a lack of socialist consciousness. They may call it maintaining local democracy but what's meant is maintaining local capitalism. The national capitalism of those who seek to leave the EU is hardly credible: its “protectionist” programmes would only push capitalism into recession, since the world’s economies are now too interconnected for such a “national” solution to be viable. In short, national capitalism has no solution.

The problem for the EU is that there is no longer unanimity among what may be termed the European capitalist class as to how the Union should develop and what are the appropriate rules for possible structures for it. The referendum debate is a manifestation of this and illustration of how the governing ideas in society are those of the capitalist elite. One section of the capitalist class, controlling large multi-national enterprises that are involved in international manufacture and  services are extremely concerned about global competition from the USA or China, etc. and view European unity as beneficial.  Against that there is another rival section to the capitalist class. These generally operate smaller businesses acting in predominately national markets or trading almost exclusively with individual countries outside Europe such as the USA. To them other capitalists within Europe are as much a threat as those outside the EU.

Contrary to what some groups believe, the capitalist class is not an eternally cohesive, Machiavellian cabal perfectly capable of imposing its will and interest on wider society. It is riven by differences as each capitalist strives to pursue their own economic interest and seize as much a share of the surplus value produced by social production as they are able, by every means at their disposal: legal, political, economic or criminal. The means by which each capitalist secures their share of surplus value determines their economic interest, and each capitalist will do everything within their considerable power to secure and enhance that interest. The EU represents an enormous share of UK trade, and much more than any other single region can lay claim to. The City of London financial centre is a big factor in the service sector and many of its exports and imports are a product of international financial transactions, the shuffling of electronic claims to riches from one side of the world to the other, and trading in currencies. A great many of these London firms, then, will be dependent on being able to extract economic rent from exploiting the restrictions on capital investment caused by currency blocs, whether from pounds to dollars or pounds to Euros. They thus not only have an interest in trading with economic partners other than the EU, but also retaining the pound to protect their income from transaction costs. It is this combination of interests which leads to economic nationalism being prioritised over joining a trading currency zone.

The referendum is taking place in an environment of public apathy and cynicism towards politicians. Interest in the political process by workers is generally at a low ebb and this disillusion can only be reinforced by “debates” such as have occurred on this issue. Real meaningful change to peoples' lives can only take place when the root causes of the problems facing humanity are considered on a worldwide scale. The working class has no interest in this passing show of inter-capitalist squabbling over the EU, except to note the spectacle and prepare for the day when there are no more nations to squabble over so-called sovereignty.

We are kept apart so that we may be separately fleeced of the fruits of our labour. We are made to hate one another because it is the key to capitalist domination which enslaves us both. We are deceived and blinded that we may not see how nationalism perpetuates a monetary system which beggars us all.