We're off and running again. 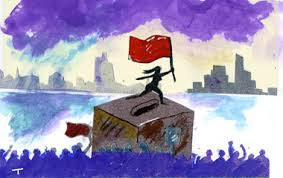 On 5th May there will be elections for the Mayor of London and the Greater London Assembly.

We won't be standing a candidate for Mayor but we will be contesting 3 of the 14 super-constituencies. These are Lambeth & Southwark once again and North East (made up of the London boroughs of Islington, Hackney and Waltham Forest) and South West (Hounslow, Kingston and Richmond). In all, over a million electors will have the chance to vote for a socialist society based on the common ownership and democratic control of the means of production with distribution on the basis of ‘from each according to ability, to each according to need’, and against present-day, capitalist society of minority class ownership and production for profit which all the other candidates will be standing for in one form or another.

The candidates are Bill Martin, Kevin Parkin and Adam Buick.

The election campaigns are being organised locally. If you want to help out at street stalls and/or in distributing leaflets door-to-door or at tube and mainline stations contact the local branch.