February 8 marks the start of the Chinese Lunar New Year

Spending during this season in 2014 on shopping and dining was around 610 billion yuan – about US$100 billion in a country of extreme wealth that is also home to 7% of the world’s poor. This is almost double the amount American shoppers spent over the Thanksgiving weekend.

Migrant workers are the backbone of China’s low-cost and labour intensive economy. They make up an estimated 278m workers who have migrated from rural parts of China to work in the big cities and for many, Chinese New Year is their only holiday. It’s often the only chance they have to spend some time with their entire family, including children who are left with their grandparents. Chinese New Year is believed to be behind the largest movement of people in the world. Up to 2.91 billion trips are expected to be made this year via road, railway, air and water. 100,000 migrant workers stuck in Guangzhou train station in the heart of China’s manufacturing region due to train delays, as they try to make their long journey home for the holiday. Migrant workers bring home their hard earned cash, which is vital to the local rural economy. Earnings from the big cities enable families to move into new and better homes, send their children to school, purchase livestock and other home additions such as new flat screen TVs.

Wealthier Chinese opt to avoid the New Year chaos and social obligations by travelling abroad for their holidays. Last year 5.2m left mainland China over the holiday. The most popular destinations are other countries in East Asia, as well as the US and Australia. China is the biggest outbound tourism spending country, with vast amounts spent on luxury goods. In 2015 Chinese consumers spent more than US$100 billion on luxury goods, accounting for 46% of the world’s total. Around 80% of these sales are made abroad. 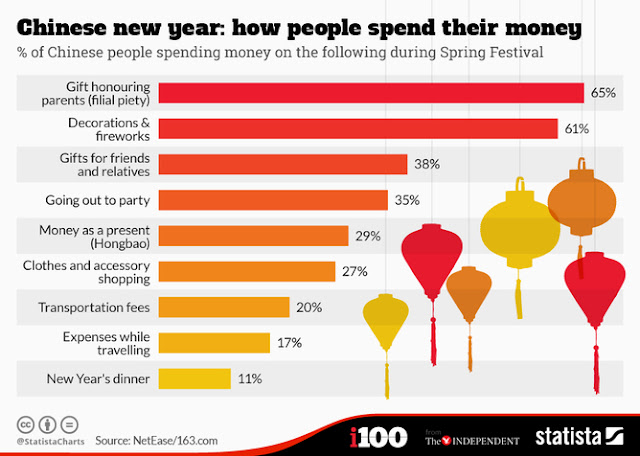 Posted by ajohnstone at 4:26 am