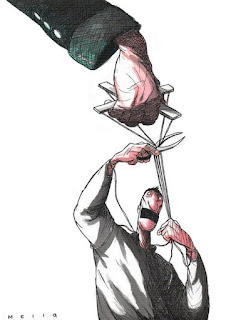 Many on the Left are critical of Fortress Europe and its lack of political accountability, but they are also generally positive about the EU and see it as playing a progressive role in national, continental and global politics. This does not mean that all of the Left are sympathetic to the EU. The NO2EU campaign, backed by the RMT union, offered “left-led opposition to the Euro super state” in European Parliament elections. The similarities between this form of anti-EU politics and the anti-EUism of right wing parties such as UKIP is alarming. Indeed the commonalities between far right and left wing positions demonstrate the need for an explicitly anti-national as well as anti-capitalist position.

Many on both the Left and Right of the political spectrum see Europe as a counter-balance to rampant global capitalism. Europe is seen as a blueprint for other societies to follow. Democracy and systems of state social welfare are frequently mentioned by Bernie Sanders. Europe is held up as a better model than the “casino capitalism” of America, for example. The supposedly benevolent, enlightened EU is seen as an example of an alternative, socially responsible form of capitalism.

Across Europe the far right, have moved away from explicitly racist positions are now beginning to develop strong anti-Islam positions which variously criticise Islam or its militant Islamist interpretation, focus on some of the anti-democratic and oppressive features of specific forms of Islam and argue they are incompatible with European ideals. This is a form of exclusionism not explicitly based on racial prejudice but on the perceived failure of Islam to adhere to what are seen to be European characteristics. Rather than being a characteristic of the far right this hostility towards Islam is now becoming a part of the normal political centre-ground. As well as being seen as the site of a more “humane” form of capitalism, Europe is also seen as the beacon of freedom and democracy. This has led many within the right to portray Europe as being in conflict with “Islamo-fascism”. This discourse is making its way into mainstream public debates. It is interesting that support for this comes from both the moderate left and right of the political spectrum.

Both the pro- and anti-EU campaigners recognise that even by current standards the EU is an undemocratic institution. They tap into and appeal to populism by declaring Europe is run by and for the bankers, a regression to conspiracy theories in which mysterious bankers pull the political strings in order to ensure maximum profits. Indeed those on the Left arguing for a Europe of peoples rather than bankers share a similarity with many on the far right who also see Europe as under threat from rampant speculative capital. The leave or stay positions share the same shortcomings: a false perspectives on capitalism and therefore false solutions which will be unsuccessful and exclusionary. Capitalism isn’t a conspiracy run by a cabal of fat cat bankers nor is it the imperialist project of Merkel, Hollande and Cameron. The true secret of society, the real power that drives it, is not that of an elite ruling, but rather the social relationships that we enter into every day. We make capitalism. To exit capitalism does not entail staying or leaving Europe. Support or non-support for the EU is not and cannot be considered an anti-capitalist position. It is important to recognise that the social welfare model that EU supporters applaud was the outcome of the struggles of workers movements. We cannot support the “enlightened” version capitalism of the EU; it must be rejected. The EU is a political structure that is to help manage both capital and populations. The EU is not and can never be an anti-capitalist structure. Our critique is not geographical, about where the borders of our political community should lie, nor is it technical, about the constitutional forms in which the domination of capital over our lives take place. It is a class analysis. Workers must be wary about getting sidetracked into discussing the management of capital.