Fighting for the commons 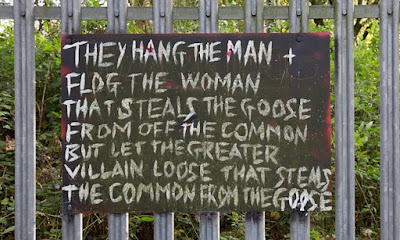 Freeman’s Wood is an 11-hectare parcel of land on the south-west edge of Lancaster. For years, Lancaster locals treated Freeman’s Wood as common space. Precisely who owned the land has been, for as long as most locals can remember, ambiguous and irrelevant. They treated it as a common – a place formally defined as “pertaining or belonging equally to an entire community, nation or culture”. In its broadest sense, a common can be any kind of resource, a plot of land or even an idea. It can “belong” to a community whether or not this is officially sanctioned. In 2012, locals were incensed when fencing, plastered with “No Trespassing” signs, suddenly encircled the site. No one seemed to know who had built the fence until it was revealed the parcel of land was listed as being owned by The Property Trust plc, an investment firm now headed by PT Holdings, a company registered in Bermuda. The firm owns more than 30 properties in England, and had submitted an informal planning proposal in 2010 to build housing in Freeman’s Wood.

Now the commoners are fighting back. Council documents record that “local people took exception” to the No Trespassing signs and “they disappeared”. Those signs that remained were subversively mutilated. For instance, “WARNING: Keep Out – Private Property – No Trespassing” became “NARNIA: Kop Out – Prat Proper – Try pissing.” The fence was breached in several places. The intention was clear: no global investment firm was going to bar locals from their shared outdoor space. In Lancaster they are fighting to have Freeman’s Wood designated a village green under the Commons Act 2006. A village green is a type of common used primarily for recreational purposes, and local residents must prove they have done just that for at least 20 years.

In England, commons are often associated with rural agrarian land, mentally welded to the 18th- and 19th-century “enclosure of the commons”, when between 1760 and 1870, about 7 million acres (about one sixth the area of England) were changed, by some 4,000 acts of parliament, from common land to enclosed land. This period was, in effect, the birth of private property as we know it in England – and the consequences have been dramatic. Karl Polanyi saw the enclosure of the commons as “a revolution of the rich against the poor” because enclosing commons was a process of imposing a designation on land from a position of power on a resource that had become a communal space over long periods of local use. The justification for doing so is always economic; however much joy varied use of space might bring to a people, land can always be put to more efficient, profitable use. Today every penny is being squeezed out of every inch of land in England, often through speculative real estate investment by transnational firms such as The Property Trust. In the 18th and 19th centuries, enclosures of the commons were labelled as “improvements”; these days it is known as “redevelopment” or “regeneration”. Today nearly half the country is owned by 40,000 land millionaires, or 0.06% of the population. But much common land was also preserved during that process. There are still 1.3 million acres of common land in England and Wales.


A New Commons movement has also gained steam in recent years, spearheaded by Duncan Mackay from Natural England and championed by the writer Robert Macfarlane. “The importance of the New Commons movement is that the commons it is envisaging really are new,” says Macfarlane. “They’re not sustained or surviving ancient commons, but actively newly designated land, with all the implications for community involvement, and access and long-term survival that are implied by that hugely powerful designation of a common.”
Posted by ajohnstone at 6:30 am